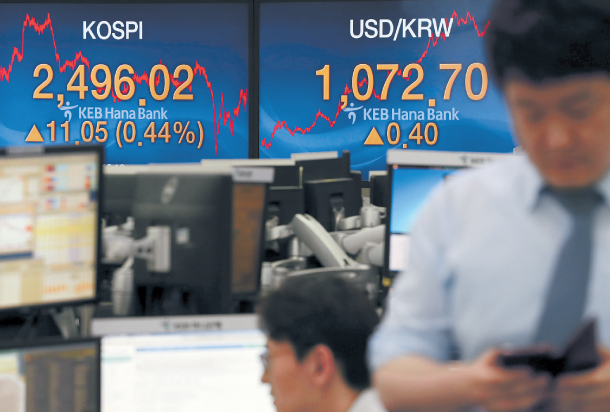 A stock board in KEB Hana Bank’s headquarters located in Jung District, central Seoul, shows the Kospi closing at 2,496.02 on Thursday, up 11.05 points, or 0.44 percent, an indication that the key rate hike by the U.S. Federal Reserve overnight had little impact on the local financial market. [YONHAP]

The U.S. Federal Reserve raised its key interest rate on Wednesday, making the U.S. benchmark rate higher than that of Korea for the first time since the financial meltdown in 2007.

In a monetary policy meeting on Wednesday, the Fed, headed by new chairman Jerome Powell, pushed up the rate by 0.25 percentage points from 1.50 to 1.75 percent. As a result, the U.S. benchmark rate surpassed the base rate of Korea, which stands at 1.5 percent, for the first time in 10 years and seven months.

“The decision was in line with expectations,” Lee Ju-yeol, the governor of the Bank of Korea, told reporters on Thursday. “As a result, it will have little impact on the Korean market.”

As Lee anticipated, there was little sign of panic in the local financial market on Thursday.

The main concern that stemmed from the U.S. key rate outpacing the local rate was foreign capital flowing out of the Korean market, but local experts think this is highly unlikely.

“Concerns of a possible leak of foreign capital are not significant since the volume of mid- to long-term won-based bonds owned by foreigners expanded recently,” said the Korea International Trade Association in a report released on Wednesday. The data showed that foreigners bought local bonds worth 2.83 trillion won ($2.6 billion) in February alone.

KITA further explained in the report that there was no notable outflow of foreign capital last year when the U.S. Federal Reserve raised its key rate three times.

“There was a temporary outflow in August and September last year but this was a result of the credit default swap premium increasing due to geopolitical risks,” it added.

Kim Sang-hoon, a strategist from KB Securities, explained that previous incidents of foreign capital outflow when rates reversed were not substantial enough to have any critical impact on the domestic market.

“There are a number of factors to consider from the perspective of investors when pulling their capital out [of the Korean market],” he added.

“We must stay vigilant as volatility in the financial market could worsen with additional rate hikes expected,” said Yoo Kwang-yeol, the first senior deputy governor of the FSS, who warned of the possible negative effects of the rate hike, including the heavier burden on Korea’s record-high household debt, which topped 1,450 trillion won ($1.36 trillion) at the end of last year.

During its meeting on Wednesday, the U.S. Federal Reserve stuck with its original forecast to raise the key rate three times this year - Wednesday was the first hike. Its projection for next year, however, changed to three raises instead of two as previously anticipated. It also forecasted two rate hikes in 2020.

The Fed signaling an increase in the pace of rate hikes left some experts predicting that the central bank of Korea may also raise the rate soon.

The Bank of Korea is slated to hold a monetary policy meeting in May after Lee starts his second term as chief of the central bank on April 1.

“We will monitor the situation cautiously now that the rates of the U.S. and Korea have been reserved, but there are many variables to consider in terms of when to increase the domestic key rate,” Lee said when asked about the possibility of a rate hike in May.

“It’s difficult to say exactly how wide the gap [between the U.S. and local rate] will be,” he added. “The 175 basis point gap in the past was reflective of the financial market condition at the time, but the current economic conditions differ from the past so it’s not easy to predict the gap we will allow this time around.”