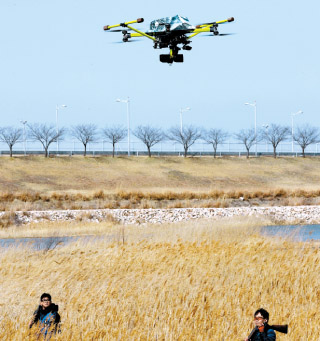 A member of the bird control team from Incheon International Airport uses a drone to ward off birds at Yeongjong Island in Incheon on Thursday. [YONHAP]

Collisions with birds are a common aeronautical headache, but a team at Incheon International Airport said they’ve found a way to solve the problem using drones.

The airport announced on Thursday that it successfully tested its drone scheme at a bird habitat on Yeongjong Island in Incheon, about 2 kilometers (1.2 miles) from the airport’s runway.

Controlling birds is necessary to prevent bird strikes, which can cause disastrous consequences such as engine damage and even plane crashes. According to the airport, there were roughly 900 bird strikes in Korea alone over the last four years.

Incheon Airport expects that the drones will help them create a more efficient and safe bird control system.

The drones used in the airport’s scheme, made by local manufacturer Soomvi, are mounted with infrared cameras and then connected to the bird control team at the airport. The drone flies 15 meters (49 feet) above the ground, and can detect birds that are out of sight such as in bushes, swamps or forests. If a drone spots birds, it can drive them away from the airport by firing blank gunshots or playing recorded sounds of predators.

The government previously banned drones from flying near Incheon Airport unless their users received special permission.

However, in the plan to create a “smart airport,” released by the Ministry of Land, Infrastructure and Transport and the airport operator last year, they mentioned easing regulations on drones.

Though the regulations on drones haven’t yet been changed, their use for airport safety will probably be allowed in the near future, according to the airport corporation.

Incheon Airport plans to also run a pilot project to use the drones to patrol around the airport logistics center and spot illegally parked cars on the airport grounds within the first half of this year.

Following the increase in drone tests, the airport will also equip the airport with systems to protect it from unauthorized drones. They include drone jamming guns, which can disrupt drones’ signals and force them to land.

“This year, we plan to introduce new ways to run the airport by offering service with top-notch technologies such as drones, self-driving shuttles and information guidance robots,” said Chung Il-young, CEO of the Incheon International Airport Corporation.