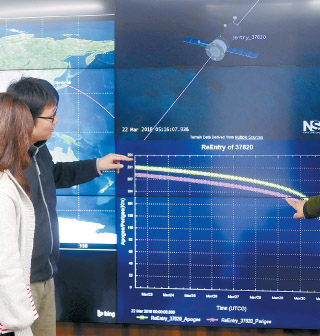 Scientists at the Korea Astronomy and Space Science Institute in Daejeon track the Tiangong-1, China’s first space station, as it falls to Earth on Thursday. The institute does not expect the station to hit Korea when it crashes into Earth sometime between the end of this month and mid-April. [YONHAP]