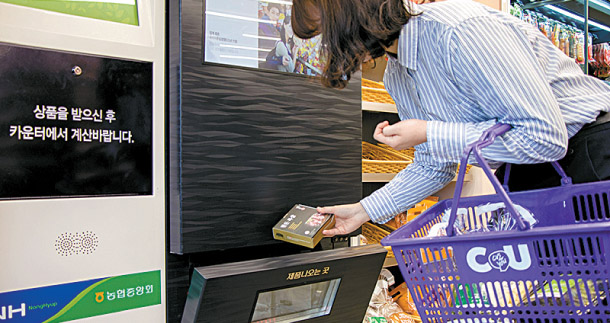 A customer at a CU branch in Goyang, Gyeonggi, buys a package of fresh meat from a vending machine on Thursday. [CU]

The vending machine offers beef and pork including samgyeopsal (pork belly), all certified as first-class from Nonghyup. Each package will weigh around 300 grams (0.66 pounds), big enough for one or two people.

The machine also uses Internet of Things technology so store staff can check the temperature, humidity and distribution dates of each package using a smartphone application.

Convenience stores have been steadily increasing their inventories of fresh food to cater to young singles or two-person households.

This partly explains why a store in an apartment complex in Goyang, a city popular with families with children, became the first to get the meat vending machine.

According to an internal analysis, CU found out that 31.2 percent of sales generated in branches near big residential complexes were fresh food. This is higher than the rate for branches located near single-person apartments, which was 14.4 percent.

Branches that showed the sharpest sales increase were also those located near big residential complexes. They collectively saw sales of fresh food grow by 48.8 percent in 2017.