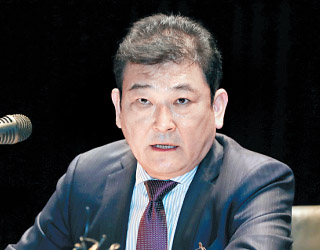 “There’s an old Chinese saying, ‘If you love someone, at the end you’ll be together,’” Chai said.

Chai emphasized Thursday that Doublestar’s reason to acquire Kumho Tire was to create synergies that would help the combined companies become one of the world’s top-10 tire manufacturer. Doublestar does not want the deal merely to steal the Korean company’s technology, as some charge.

Doublestar invited a group of Korean reporters to the company’s headquarters in Qingdao, China, last week, and then he traveled to Seoul. During a press conference at the headquarters of Kumho Tire’s main creditor, the Korea Development Bank, Chai repeatedly emphasized the need to get Kumho Tire’s union’s consent to the deal and promised he would uphold any agreement reached with it according to the law.

“A three-year job guarantee [of Kumho Tire workers] is an agreement with the KDB according to international customs,” Chai said. “However, this does not mean that after three years we will be withdrawing or relocating Kumho Tire [to China]. Instead we will be raising Kumho Tire’s competitiveness by upgrading the production facilities, which will in return create more jobs and contribute to Korea’s economic growth.”

He said the priority of Kumho Tire is turning the company around and normalizing cash flow, which it will do under the agreement with Doublestar.

Doublestar has agreed with the KDB to purchase its 45 percent stake in the Korean tire company for 5,000 won ($4.66) per share, or 646.3 billion won in total. It will make fresh investments in Kumho Tire up to 200 billion won to upgrade or expand production. It is guaranteeing workers’ jobs for 3 years and promising to remain the largest stakeholder in Kumho Tire for five years.

He emphasized Doublestar’s promise to give Kumho Tire’s management independence.

“This is not a traditional M&A where the largest shareholder controls the company,” Chai said.

KDB Senior Vice President Lee Dai-hyun said the Chinese company plans on naming one outside director to Kumho Tire’s board and only executing its rights as a shareholder. It will leave major management decisions to the current Korean managers.

The KDB vice president said creditors will also name outside directors to the board and exercise their rights as the second-largest stakeholder in the tire company and see that Doublestar sticks to its promises.

“There are concerns about Doublestar fleeing after profiting from the acquisition, but even if Kumho Tire turns around and generates an operating profit, we estimate that it would take 10 to 15 years for Doublestar to recoup its investments through dividend payouts,” Lee said.

“Also, we have placed a clause in the contract in which Doublestar would have to pay to use Kumho Tire technologies.”

Lee said that as creditors have invested 2.4 trillion won in the tire company, in order to recoup that investment, they will have to remain creditors of Kumho Tire for at least two decades, which will be a check on Doublestar.

Lee stressed that the tire company’s situation is different from GM Korea’s. The car company is a victim of a changing paradigm in the automotive industry, but the tire market won’t see such radical changes as long as people drive.

The KDB has given the union until the end of this month to decide on the proposed deal.

“We have set the date for the end of this month because we believe that Kumho Tire, which is struggling to pay its employees wages, will face a major liquidity crunch after March 30,” Lee said.

Doublestar Chairman Chai said he is trying to contact the company’s union through the KDB.

“We will try to communicate soon,” Chai said.

“Our goal is not to own or control but rather find cooperation with Kumho Tire,” Chai said.

Major synergies could be generated with Kumho Tire’s high-end tires for passenger vehicles and Doublestar’s strength in the middle and low-end market, with its specialization in commercial vehicle tires.

“Kumho Tire is excellent in its skills and technology,” Chai said. “But it is in a difficult situation today.”

When asked how Doublestar will react if the union calls for a strike, he said, “If the union workers go on strike, it is their right as workers.