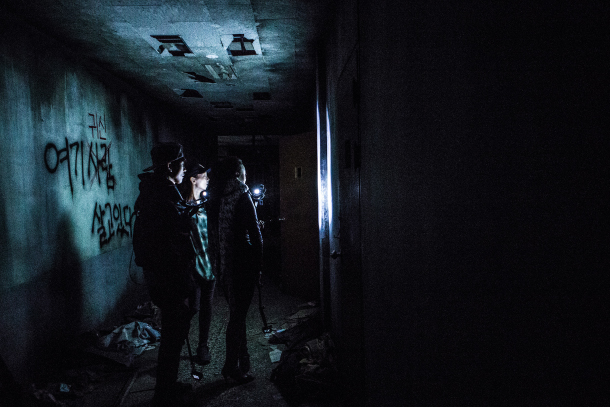 “Gonjiam: Haunted Asylum” is a horror movie set in a psychiatric hospital that CNN Travel called one of the “seven freakiest places on the planet” in 2012. [SHOWBOX]

Chernobyl, Hashima, the Isle of Dolls - they conjure up images of abandonment, the paranormal, the other worldly. Just their names can send shudders down the spines of the faintest of heart.

In Korea, there is a lesser known location said to be cursed by poltergeists but no less scary than the usual haunts: the Gonjiam Psychiatric Hospital.

Named by CNN Travel in 2012 as one of the “seven freakiest places on the planet,” the dilapidated mental institution in Gwangju, Gyeonggi, is the backdrop of the smart but flawed horror movie “Gonjiam: Haunted Asylum.”

Even before its release, the name Gonjiam was enough to draw hype not just in Korea but outside as well. The film’s distributor, Showbox, managed to pre-sell it to 47 markets including Australia, Japan and Taiwan. Despite the sky-high anticipation, “Gonjiam” fails to diverge from the tried and true cliches of the horror genre that have tired so many moviegoers.

The local lore of Gonjiam Psychiatric Hospital involves a mass suicide of patients that led to the hospital’s shuttering. In the film, the hospital director is rumored to have killed all her patients and disappeared without a trace.

Though scenes were shot at the Busan National Maritime High School, the production team remained faithful to the floor plan of the actual hospital, recreating its exterior and hallways to the T.

The story, too, is based off the bone-chilling legend surrounding the real Gonjiam. Ha-jun, played by Wi Ha-jun, is a vlogger who runs a horror-themed YouTube channel called “Horror Times.” He recruits six people - three boys and three girls - to go inside Gonjiam as an entertaining excursion. His aim is to get more than a million views on his channel, but his pursuit of fame and fortune puts the entire team in danger.

The film is shot like an amateur mockumentary, that shaky aesthetic which most will recognize from the 1999 film “The Blair Witch Project.” Each of the six thrill seekers is carrying a camera while running through the labyrinth of Gonjiam and exploring different areas. There’s a room once used for experimentation and rooms that housed showers. Their mission is to find the cursed room, No. 402, which nobody has succeeded in opening since the hospital’s closure. The legend goes that anyone who tried to go in never survived.

Their time in the abandoned asylum is punctuated by typical horror film cliches, inexplicable phenomena like letters appearing on walls and members becoming possessed by ghosts. In one scene, the words “let’s live” written on a crumbling gray wall mysteriously change to “let’s die.” Though they might cause the heart to skip a beat, there is no particular scene in this horror movie that any aficionado of the genre hasn’t seen in the past. Some of the trite elements include a creepy doll, a ceremony to summon ghosts and an electromagnetic field monitoring device that reminds of “Ghostbusters.”

The film’s use of first-person perspective gives audiences a realistic experience (there are plenty of close-ups of horrified faces), but they also make the film seem like a drawn-out YouTube video playing out on a big screen. Instead of providing a back story on the ghosts harboring revenge, the film fully concentrates on the team’s horror experience itself, cementing the director’s aim to “concentrate on triggering fears from audiences.”

In service of that mission, “Gonjiam” completes its 94-minute tale without the use of any music or score. The only layered sound is the ominous ping and pong of a bouncing table tennis ball said to have been enjoyed by the hospital director.

Although the film is based off the actual Gonjiam Psychiatric Hospital in Gwangju, there is no clear evidence that the patients there actually committed suicide, and there is no proof that the hospital director disappeared.

In fact, ahead of the film’s opening in local theaters on Wednesday, the real hospital’s proprietor filed an injunction against its release, but a court dismissed it.