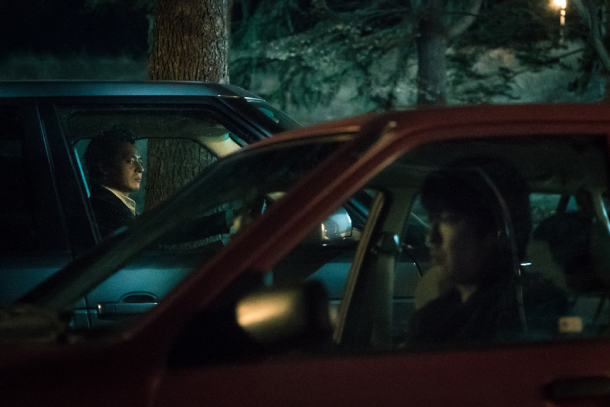 “Seven Years of Night” is an adaptation of author Jeong Yu-jeong’s best-selling novel of the same title. [CJ ENTERTAINMENT]

A violent man on the verge of getting divorced loses his daughter in a car accident. Considering that she got hit while trying to run away from her abusive father, it’s quite powerful to see the violent man flipping his lid in search of the driver who accidentally murdered his daughter. Yeong-jae (Jang Dong-gun) from the upcoming thriller drama “Seven Years of Night” will stop at nothing to get his revenge.

Revolving around a guard named Hyun-su (Ryu Seung-ryong), who is about to be assigned to a quiet town, the film begins as he accidentally hits Yeong-jae’s daughter after she suddenly jumps in front of his car.

Not knowing what to do, Hyun-su makes the wrong choice and leaves the girl dead.

The movie doesn’t spend much time tracking down the man behind the innocent girl’s death, but instead goes straight to Yeong-jae’s attempt to impose the same kind of pain on Hyun-su, who has a son of the same age as Yeong-jae’s daughter.

Coming from director Choo Chang-min, who was behind the historical period drama “Masquerade” (2012) which passed the 10 million ticket sales mark, “Seven Years of Night” is an adaptation of a best-selling novel written by Jeong Yu-jeong.

“My biggest concern was how to meld the [novel’s] literary value into the movie. Although my past movies are mostly heart-warming, I wanted to try something new this time,” said Choo during a press event held in central Seoul on Wednesday.

Though based on the theory that human nature is fundamentally evil, the director explained that, “I believe there’s a reason behind our fundamental evil nature. I hoped to provide a [valid] reason for the character’s evil behavior. That’s the biggest reason I decided to sit in the director’s chair.”

The biggest difference between the novel and the film, according to the director, is “the novel stresses thriller elements. Oh Yeong-jae is described as a psychopathic murderer. But I couldn’t quite understand that part, so I thought it was my role to show [the audience] the reasons behind [his] evil nature.”

Regarding his role, Jang said, “Regardless of the film’s performance, I personally have no regrets.”

Co-starring actors Song Sae-byuk and Ko Kyoung-pyo, the movie will arrive in theaters on Wednesday. It is rated 15 and above.