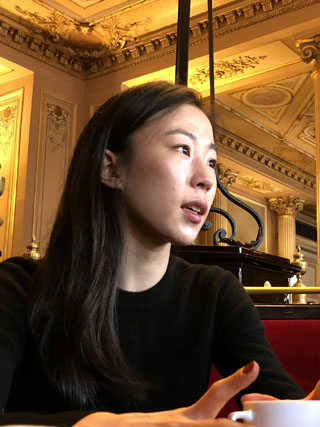 Ballerina Park Sae-eun, left, sits for an interview with Yonhap in Paris on Tuesday. Park dances during a recent performance of “Onegin” at the Palais Garnier in Paris, where she has lived for the past seven years. [YONHAP]

Ballerina Park Sae-eun, a “premier danseur,” or first dancer, of the Paris Opera Ballet, watches ballet recitals in her free time. When her mom recently visited her from Korea, the pair went to Germany to watch a ballet show.

“I don’t have any other hobby except for doing ballet and watching ballet shows. I tried to take some interest in other topics but just couldn’t do it. I’ve lived in Paris for seven years but all I have done is ballet. I haven’t gone up the Eiffel Tower yet,” Park told Yonhap in a recent interview.

“I feel happiest and most comfortable when I dance. If I can’t dance, I feel that way when I watch others dance.”

She recently finished performing in “Onegin,” a ballet created by John Cranko for the Stuttgart Ballet in 1965, based on the novel “Eugene Onegin” by Russian writer Alexander Pushkin. The show ran at Palais Garnier for one month from early February.

When she was cast for the lead female role, Tatiana, she felt like she “owned the world.”

“I didn’t expect it at all…I thought it would be amazing if I played even the supporting role, Olga. Then when the announcement was made online, it was like a dream come true.”

“I love Tchaikovsky and his ‘Swan Lake.’ And I do love ‘Onegin,’ too. They all make me cry. I watched ‘Ogenin’ 10 years ago for the first time in Korea. It was so good that I was almost shocked.”

But she could play Tatiana only five times out of 21 shows because of rib and calf injuries she incurred during practice. 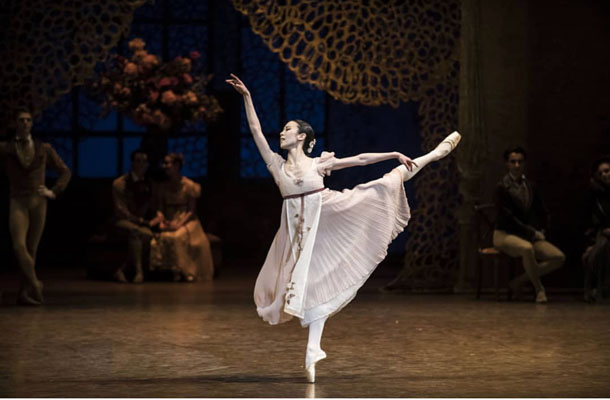 On Jan. 2, she had her ribs fractured while being lifted by her partner. She had to take 10 days off for medical care, delaying her appearances in the show.

“I was devastated. I had dreamed so long of performing as Tatiana. In the hospital, I almost wailed as I watched the X-ray of my injury. The doctor consoled me by saying that I could still perform if I could put up with the pain.”

She rested for 10 days to recover. Right before the scheduled performance, she got mostly well and felt almost no pain. But she inflicted another injury to her calf. She was forced to rest for another five days.

While she was happy that the show otherwise ran smoothly and was satisfied with her performance, she still believed there was room for improvement.

“When you do this kind of big show, you have always some afterthoughts…No artist would be entirely happy with their work or performance. But I did my best so I don’t regret.”

The 28-year-old trained at the National Academy of Dance of the Korean Ballet and joined the Paris Opera Corps de Ballet in 2011. In 2016, she was promoted to her current rank.

She wanted to play an exemplary role for the two junior Korean dancers at her company - Yun Seo-hoo and Kang Ho-hyun.

“I try to give them pieces of advice because I’ve walked the same path as them and I understand them better. I don’t think I am special. I’ve just walked this road earlier than they started.”

She is nominated for the Benois de la Danse, one of the most prestigious ballet competitions, for her role in “Jewels.” She is scheduled to perform in Festival Benois de la Danse 2018 on June 5 at the Bolshoi Theatre. After the show, the final winners will be announced.

“I don’t have high expectations. The higher the expectation, the greater the disappointment. I just practice and wait for my opportunity.”Yonhap