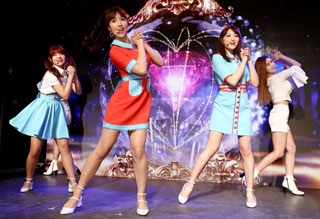 Honey Popcorn, a girl group comprised of Japanese adult video actresses, performs during a showcase for the its debut album in Seoul on Wednesday. [YONHAP]

For a freshly-minted K-pop band, the trio could not look any more ordinary. Dressed in bright colorful dresses, the bubbly ladies of Honey Popcorn sang their catchy synth-pop track, “Bibidi Babidi Boo,” during their debut showcase on Wednesday in Seoul, dancing adorably like any other by-the-numbers rookie girl group.

These seemingly unassuming women, however, have found themselves at the center of a public brouhaha, with tens of thousands demanding the government ban their activities. To a large extent, the controversy was unavoidable. The three singers are all Japanese adult video actresses.

The Honey Popcorn members, Mikami Yua, Sakura Moko, and Matsuda Miko, all started their careers in the Japanese entertainment industry as singers in the J-pop idol scene. After retiring from their bands, SKE48, NMB48 and Bakusute Sotokanda Icchome, respectively, they turned to the Japanese adult video scene. Mikami later joined Ebisu Muscats, a musical group composed of Japanese adult video stars, in 2016.

The group’s formation was announced in late February, along with plans to hold a showcase in Seoul on March 14. The news of the members’ steamy professional backgrounds was more than enough to turn heads. Many parents and conservatives became vigilant and demanded the group cancel their debut. A petition was filed on the presidential website, requesting the government to ban Honey Popcorn’s debut.

“There are many cases where idol stars directly affect fans. Idols are heroes to the young, especially teens,” the petitioner, whose name was not made public, asserted. The petition had been signed by more than 35,000 people as of Thursday afternoon. Social media also became flooded with comments calling for the singers to return to Japan.

Such reaction is not surprising as the K-pop industry tends to rely heavily on the clean and wholesome image of its stars. Many pop singers, especially female stars, rely heavily on advertisement deals in securing revenue for their companies. The image values of singers, when associated with negative news, tend to decline steeper compared to stars in other fields.

Amid the backlash, the band’s Korean agency, Kyun Create, suddenly canceled the showcase in early March, prompting speculation that the team capitulated to the negative sentiment. The timing also coincided with the spread of the Me Too movement in South Korea. The movement has crystallized lingering opposition to predatory sexual aggression, a subject that is not uncommon in pornographic material.

But to the surprise of many, the company on Monday again notified reporters that the trio would move forward with the canceled showcase on Wednesday. The band released its debut EP the same day.

“I am engaged in such [adult video] work in Japan. I also consider that work serious, but right now I want to focus on promoting Honey Popcorn,” Mikami, leader of the group, said at the showcase held in western Seoul on Wednesday.

Aware of the perception conundrum, Mikami said she would understand if not many could support the group. “I will try to be grateful for the fans who can root for us,” she said.

By all accounts, the members appear genuine in their passion for K-pop and their project. According to Kyun Create, the members are huge fans of K-pop music, with Mikami’s partiality towards Korea and Korean culture fairly well known among her fans. On her YouTube account, Mikami has several videos of her dancing to hits from A-Pink, Cosmic Girl and Twice.

According to the company, Honey Popcorn is essentially a passion project funded by Mikami. The band also does not appear gimmicky, with production values for the music and videos on par with standard rookie K-pop acts. Not all opinions are negative either, with many supportive comments posted on their artist page on the music streaming service Melon.

“I want to live in a world where Honey Popcorn can sing with confidence,” a Melon user wrote. “Korean girl groups also often perform lewd dance moves. Is there a reason why these girls can’t follow the footsteps of idol girl groups?” posted another user.

But regardless of the earnestness in their affinity for K-pop and Korea, the team’s debut has become a litmus test, for better or for worse, in measuring South Korean public tolerance towards the association of K-pop with the adult video realm. It is not clear whether the singers will continue to film adult videos while releasing and promoting under Honey Popcorn.

“It would be hard to prevent any group, regardless of its past, from pursuing its project. At the same time, expressing opposition against ideas that go against one’s belief is something that should be promoted in a healthy democracy,” Chung Deok-hyun, a cultural critic, said.

Chung expected that the future of Honey Popcorn will depend ultimately by how they are received by the general public.

“I think it’s best just to let them be. If they grow on people, they could become bigger. I think the market will ultimately decide the group’s fate.