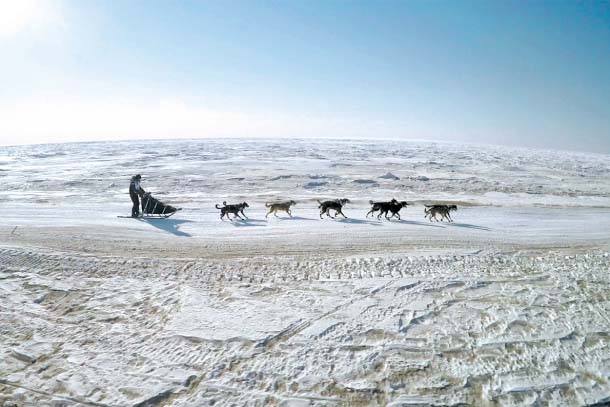 This image released by Starz shows a scene from the documentary “Sled Dogs.” [AP/YONHAP]

NEW YORK - You’re on the couch. It’s been a long day. The remote control is in your hand. What can you watch?

There’s that new CNN documentary series on the pope. Or maybe you’re more in the mood for some sinners in “Girls Incarcerated” on Netflix? There are cute critters on Hulu’s “March of the Penguins 2: The Next Step” or you could watch former slugger David Ortiz as he figures out his next career step on Fusion.

Keep scrolling? Sure. What about a new three-part documentary about Silicon Valley on Science? Or the series about gangsters on Reelz? How about the A&E series on adults returning to high school in “Undercover High”? What about some David Bowie or Elvis on HBO?

If you’re looking for documentaries these days, they’re hard to miss. Once considered more medicinal than entertaining and consigned to high-brow places like PBS and art house theaters, documentaries are scattered across the film and TV spectrum, as well as online portals like Facebook Watch or YouTube Red and on video streaming apps like go90. Even mighty NBC is getting in on the act with a documentary on Martin Luther King Jr. airing Saturday night.

“It feels like the golden age of documentary right now,” says Josh Koury, a professor at Pratt Institute and a documentary filmmaker. “It’s an amazing time to be making documentary stories.”

Starz, which last fall began offering new documentaries for the first time, has doubled down by adding four original docuseries to its summer schedule, exploring everything from the criminal justice system to the legacy of hip-hop.

Jeffrey Hirsch, chief operating officer for Starz, says the boom owes a large part to technology, which has allowed filmmakers access to relatively inexpensive, high-quality cameras and editing equipment. What has emerged for content-hungry platforms is often a cheaper alternative to scripted films and series.

“The cost of creating these stories has come down, I think. The ability to travel and to actually be your own investigative journalist has become possible. And the world has gotten smaller through technology,” he said. “So I think the opportunity to relive or retell some of these stories has become a lot more accessible.”

Showtime also has increased its output of documentaries, said Vinnie Malhotra, head of documentary programming for the network. He marvels at how much the landscape has changed from 15 years ago when documentaries were independently financed and had limited releases.

“There are more outlets for documentary than there ever have been before,” he said. “There’s a lot of money being fueled into the documentary industry from newer platforms that have emerged with interest in the form of storytelling - places like Netflix, places like Amazon, other streaming and tech companies.”

No wonder recent documentaries have lately found themselves at the center of popular culture, including Ava DuVernay’s “13th” on the American prison system, the Oscar-winning “O.J.: Made in America,” “The Jinx” about Robert Durst, and “Blackfish,” on the treatment of orcas. Netflix scored its first Oscar this year with the documentary “Icarus.”