Korea and Vietnam to boost trade

Korea and Vietnam to boost trade 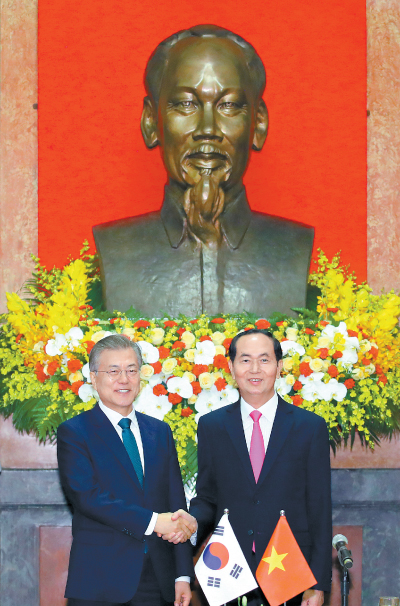 Korean President Moon Jae-in, left, poses for a photo with Vietnamese President Tran Dai Quang in Hanoi, the capital of Vietnam, after holding a summit meeting in the presidential palace. [YONHAP]

Korea and Vietnam agreed to boost their bilateral trade to $100 billion by 2020 in a summit meeting Friday, a 56 percent increase from last year’s total.

The agreement, announced by the Blue House is a joint press release, came after President Moon Jae-in met with his Vietnamese counterpart Tran Dai Quang in Hanoi, the capital of Vietnam, during his three-day state visit to the country. Moon arrived Thursday and was expected to leave today.

While highlighting the countries’ 25 years of diplomatic ties, the Blue House relayed proposed measures to reduce Vietnam’s trade deficit with Korea, saying both sides agreed to strengthen cooperation in technological assistance across the production, processing, distribution and consumption of Vietnamese agricultural and processed foods traded with Korea.

Both countries also agreed to expand their free trade system by facilitating negotiations in the Regional Comprehensive Economic Partnership, or RCEP, this year. The RCEP includes the 10-member Association of Southeast Asian Nations (Asean) plus Korea, Japan, China, India, New Zealand and Australia. The bilateral free trade agreement between Korea and Vietnam went into effect in December 2015.

The Blue House said Moon outlined his “New Southern Policy” to the Vietnamese president, which the foreign leader reportedly “welcomed” and promised to help improve relations between Seoul and members of Asean.

A pivot to Southeast Asia was first announced by Moon last November. The New Southern Policy is an ambitious vision to expand Korea’s influence in the region with the promise of treating Asean members as diplomatic and economic partners as important to Korea as the United States, China, Japan and Russia.

Moon vowed to expand Korea-Asean relations, currently centered on the trade of goods, to exchanges in technology, culture, the arts and people. Moon promised to visit every Asean country before his five-year term ends in 2022.

On North Korea, which has diplomatic ties with Hanoi, the Blue House said Quang “supported and welcomed” Seoul’s efforts to talk with Pyongyang and peacefully resolve the North Korea nuclear crisis. Both leaders agreed that the establishment of eternal peace on the Korean Peninsula was a crucial step toward world peace.

Various memoranda of understanding were signed between Seoul and Hanoi, through which both sides vowed to enhance cooperation in transportation, infrastructure, construction, urban development and the fourth industrial revolution, among others. The Blue House said Moon invited the Vietnamese president and his wife to Korea, which Quang accepted. Today, Moon will leave for the United Arab Emirates, where he is expected to hold a summit with Sheikh Mohammed bin Zayed Al Nahyan, the crown prince of Abu Dhabi.