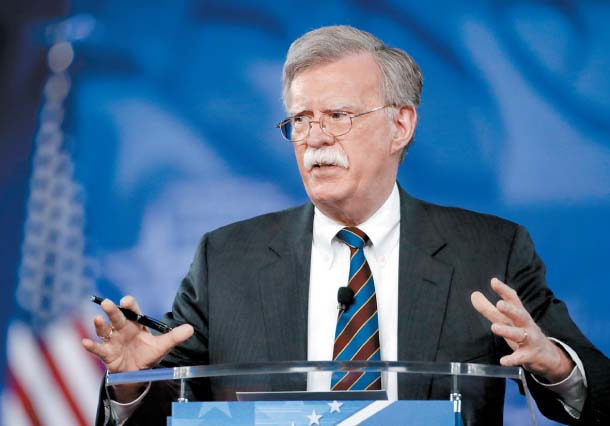 John R. Bolton, a former U.S. ambassador to the United Nations who once threatened North Korea with military action and regime change, was named the new national security adviser to President Donald Trump on Thursday, in the latest White House shake-up just weeks ahead of the country’s first summit with Pyongyang.

Ending months of speculation that Lt. Gen. H.R. McMaster would be fired from his post due to personality and policy differences with Trump, the president tweeted Thursday that he was pleased to announce Bolton as his new national security adviser, adding that the reshuffle was to go into effect on April 9.

“I am very thankful for the service of General H.R. McMaster who has done an outstanding job & will always remain my friend,” a part of the tweet read. “There will be an official contract handover on 4/9.”

Bolton, who served as a Fox News contributor before Trump’s announcement, said he would “humbly accept” the job offer in a Twitter post and looked forward to working with the president and his team in addressing “complex challenges” in an effort to make the United States “safer at home and stronger abroad.”

It is not known for sure why Bolton was selected, but the New York Times cited unnamed government officials as saying Trump met regularly with him and that he was on the list of candidates for the post since the beginning of the administration. Trump, said the sources, hesitated in part because of his “negative reaction” to Bolton’s “walrus-style” mustache.

The decision to replace McMaster came only nine days after Trump fired Secretary of State Rex Tillerson, replacing him with the hawkish director of the CIA, Mike Pompeo, though a Senate confirmation is pending. The position of national security adviser doesn’t require one.

The announcement to tap another hard-liner in terms of North Korea policy put Seoul at unease as President Moon Jae-in prepares to meet North Korean leader Kim Jong-un late next month for their first face-to-face dialogue, and as Seoul is trying to lay the groundwork for Washington’s historic first-ever summit with Pyongyang, which has yet to be scheduled.

Bolton expressed serious doubts about North Korea’s sincerity earlier this month in an interview with Fox News’ “America’s Newsroom,” telling the right-wing channel that the “only thing” the regime was serious about was getting deliverable nuclear weapons. If a new round of talks begins, the North would be able to possess a deliverable nuclear weapon by the end of this year, he continued.

Bolton declined to answer whether Trump should meet with Kim on Thursday evening, shortly after Trump’s tweet, when he appeared on Fox News’ “The Story.”

A senior Blue House official said Seoul was planning to carry out “various deep negotiations” with Bolton to resolve Korea Peninsular issues, and did not give out the customary response that it “welcomed” Trump’s personnel decision.

“We’re aware that he’s trusted by President Trump,” said the official, who spoke on the condition of anonymity. On speculation that Bolton may try to sabotage Seoul’s efforts to bring Trump and Kim together, the official said it “isn’t important” how Bolton thought about the Trump-Kim summit before he was tapped, and that what mattered was the fact that Trump was showing the “will” to meet the North Korean leader.

The reaction of Bolton’s South Korean counterpart Chung Eui-yong, head of the National Security Office in the Blue House, was “not bad,” said the Blue House source.

Bolton, who served as American ambassador to the UN from 2005 to 2006, was directly involved in the drafting of UN Security Council resolution 1718, which followed Pyongyang’s first nuclear test in October 2006.

“The North Korean ambassador at that time left the conference room in defiance of the resolution,” recalled a South Korean diplomatic source, who asked not to be named. “I remember Ambassador Bolton pointing his finger at the empty seat with rage, yelling North Korea should be expelled from the UN. It truly was a menacing scene unlikely to occur again in the history of the UN Security Council.”

In 2003, Bolton was involved in the six-party North Korean denuclearization talks as a member of the American delegation, according to diplomatic sources with knowledge of the series of talks. One time, he described North Korean society as “hell” and called then-North Korean leader Kim Jong-il a tyrant. The North was said to have called him a “human scum” and “vampire,” saying he was unqualified to join the six-party talks.