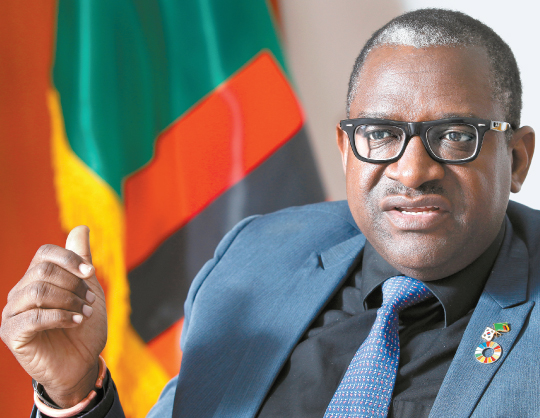 Wylbur Chisiya Simuusa, the recently appointed Zambian ambassador to Korea, is interviewed by the Korea JoongAng Daily at the Zambian Embassy in central Seoul on March 13. [PARK SANG-MOON]

Korea and Zambia officially established diplomatic ties in 1990, but Seoul still does not have an embassy in the country. Instead, Korea’s interests are represented by its diplomatic mission in Zimbabwe.

Simuusa, who presented his credentials in December, sees a future in bilateral partnerships on solar and bioenergy development, but the success of these projects hinges on the establishment of a Korean outpost in Zambia.

“One of the things I observed coming in is that Korea has so much potential and Zambia has so much potential, but the two have very little relations,” the ambassador told the Korea JoongAng Daily at the Zambian Embassy in central Seoul on March 13. “One of the reasons lies with the awareness level, and I am pushing very hard for an embassy in Zambia. Here we are, doing our best to get Koreans to go to Zambia, but without an embassy there.”

Simuusa said his country missed out on opportunities to establish exchange programs with Korea because the nearest embassy is in another country. The mission in Zimbabwe not only serves Zambia but also Malawi.

The ambassador believes establishing an embassy will encourage more information exchange between the two countries and “install a lot of confidence in Koreans on Zambia.”

Before coming to Korea, Simuusa served as minister of agriculture, minister of foreign affairs and minister of lands, natural resources and environment protection. His experience has informed his interest in energy cooperation.

“Zambia has been noticing changes in the climate which has affected Zambia in the last five to 10 years,” he said. “Most of our electricity is generated from the water, and the drought has made worse the power deficit, so we are now pushing for alternative energy sources, which include solar and possibly nuclear, and especially bioenergy, which are areas that Korea is very strong at.”

According to the Korea-based Green Climate Fund, three-quarters of Zambians do not have access to power. In February, the fund contributed to a $154 million investment in Zambia’s renewable energy program. Other financiers included the African Development Bank.

“Korea is a world leader in terms of solar energy and energy-efficient light appliances, such as the LED lights,” Simuusa said. “I am hoping to get some Korean companies interested in cooperation with Zambia.”

There are already Korean firms involved in local projects, including construction of a bridge between Zambia and Botswana and improving public safety in the Zambian capital.

Daewoo E&C won the World Bank project to construct the cross-country bridge in 2014.

“We depend on the Zambezi River to get boats across between the two countries, and sometimes you find trucks queued [near the riverbank] for weeks [to get goods shipped across],” Simuusa said. “This Kazungula Bridge will link Zambia to Botswana, South Africa and Namibia. It will open up the whole area.”

The bridge is expected to be finished in March 2019, the ambassador said.

In 2016, Korea and Zambia also signed an agreement to develop a public safety information system in Lusaka, Zambia’s capital. The project, worth $43 million, is being funded by the Export-Import Bank of Korea.

In addition to cooperating on development, the ambassador said his major objectives during his tenure include increasing the number of high-level visits and student exchanges - starting with himself.

“I’m a student trying to learn this Korean miracle,” he said. “The country went from being a donor recipient to an OECD member and donor country in a generation. I think some of the reasons include the strong leadership of the country and the mind-set of the people. Koreans are very disciplined. I’ve also noticed that Korea is very spiritual - there are lots of churches here. Maybe that’s one of the reasons of the miraculous development, but I’m still studying.”

Simuusa encouraged more Koreans to visit his country and see for themselves what distinguishes Zambia from others in the region.

“Zambia will be a very different destination for Korean travelers,” he said. “In terms of safaris and wildlife, we have the big five - the rhinos, lions, leopards, buffaloes and elephants - and a lot of very rare bird species.”

And of course, there’s Victoria Falls, considered one of the great natural wonders of the world. “If you go after the rainy season ends around April or May, the curtain of the falls will be full.”

In addition to Victoria Falls, Zambia is home to 17 waterfalls and an abundance of lakes and rivers, making it the largest water resource in southern Africa. “The best times to visit are April to June and August to October,” Simuusa said. “October is a good time to go for a safari, when most of the animals are coming to look for food.”

Zambia hosts an annual tourism expo called Zatex. This year’s expo will be held from April 12 to 14 in Lusaka, showcasing tour programs to Livingstone and walking and driving safari tours across South Luangwa, Lower Zambezi and Kafue national parks.

“I think if Korea half knew what is there, you’d have a direct flight to Lusaka,” the ambassador said.