ICOs are hot - even though they’re not legal

ICOs are hot - even though they’re not legal 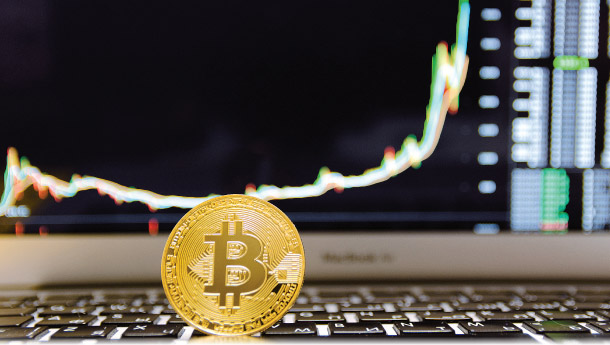 It was his first visit to Korea and he was impressed by the enthusiasm Korea shows for the blockchain technology.

“Technology-wise, Korea is way ahead of the U.S. and even Japan and Hong Kong,” Prandecki said.

But Prandecki said he wasn’t only in Seoul to attend the forum on blockchain technology and cryptocurrency.

“My purpose [in Korea] is to promote my project, Bob’s Repair,” Prandecki said.

Bob’s Repair, which Prandecki and his brother Alexandre started in 2014, is a platform that connects private contractors with customers using blockchain technology to increase transparency and lower costs.

Prandecki said he was looking for “purchasers” of his company’s initial coin offering (ICO), the equivalent of initial public offerings (IPOs) in the non-crypto business world.

Last year, Bob’s Repair was able to raise $5 million on presales of its ICO. It hopes to raise an additional $24 million during the company’s main ICO. 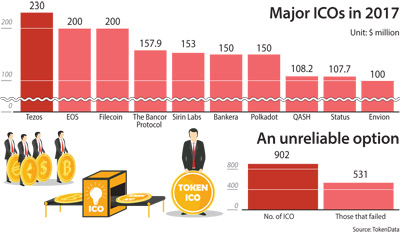 “We didn’t do much advertising in Asia for the presale,” said Chin-One Chan, marketing manager for Bob’s Repair. She said there’s a huge interest in ICO investments among Koreans and Chinese, adding that some of the ICOs done last year wouldn’t have reached their goal if not for Korean investors.

Zikto, a Korean health care big data start-up, held an event called “Insureum Meet-up with Hashgraph” at Hana Financial Investment center in Gangnam, southern Seoul, on Sunday. It is also heading for an ICO and used the event to explain the company’s technology - labeled blockchain-based insure-tech - and its management plan on its etherium-based token Insureum to investors.

The company has opened an office in Singapore for the ICO and wants to raise 20 billion won ($18.4 million).

Although the values of bitcoin and other cryptocurrency has stabilized after spikes in the second half of the year, interest in ICOs as a new alternative investment has been heating up.

Investors are watching Telegram’s recent ICO, which could raise a record $250 million and $300 million.

Korean companies have been jumping into ICOs since last year, including Glosfer, a blockchain technology service company considered a pioneer in Korea.

The company was able to raise 14.8 billion won from local ICO investors last September. It reached its goal in just eight hours.

The company has plans to raise an additional 60 billion won in an overseas ICO this month or in April.

Major IT companies are joining in.

The largest Korean mobile messenger app developer, Kakao, earlier this month announced that it will launch a company that specializes in blockchain development and investment, which helped push Kakao’s stock up 7.7 percent.

There is speculation the new company will do an ICO abroad.

“Details regarding the new entity are few, but we believe that it will engage in initial coin offers by Kakao and its subsidiaries, ICO platform development and investments in blockchain start-ups,” said Oh Dong-hwan, a Samsung Securities analyst. “We expect Kakao Blockchain [the tentative name of the company] to create synergies with affiliate Dunamu’s domestic cryptocurrency exchange Upbit.”

The analyst said despite the recent leveling off of prices of cryptocurrency, interest in blockchain technology remains high.

Unlike initial public offerings, which give equity in exchange for investment, an ICO raises investment by selling virtual tokens based on cryptocurrency.

One of the advantages of an ICO is that it does not have to go through the rigorous processes of approval that happens with an IPO.

Anyone can apply for ICO with what a so-called white paper, which describes what the company will do with the investment it raises.

An ICO is considered successful if it reaches a target in a given time frame. If it fails to reach the target, the investment is returned to the token buyers.

An ICO is a new way for start-ups to raise investments. Market experts say very young companies normally get investments from angel investors or venture capitalists.

Under conventional investment schemes, the start-ups had to give shares to its early investors. That is not required in an ICO, which gives the companies more independence.

And investors get the opportunity to join in the development of the latest technology.

According to Token Report, there were 900 ICOs that raised $6.5 billion last year. In the first two months of this year, there were 500 ICOs raising $1.6 billion.

The government says ICOs are a type of illegal fund raising.

“The issuing of cryptocurrency and its distribution can conflict with existing law,” Choi said. “Also, there’s a possibility of being connected to fraud or a pyramid scheme, and from the point of view of protecting investors, we will maintain our negative view [of ICOs].”

The Korean government is dubious about cryptocurrency, which it sees as a form of gambling, but it wants to support the blockchain technology that cryptocurrency is based on.

On the possibility of a Kakao ICO, the FSC chairman cautioned that the ICO should not damage the credibility of the company’s online bank. It said it has no legal grounds to prevent the company from doing an ICO overseas.

“The ICO market is still in an early stage, which means it has an opportunity to become a lucrative business,” said Park Soo-yong, a professor of computer engineering at Sogang University. “Korean companies should be starting to take the lead but they are cautious due to the government.”

The government’s cautious approach on ICO is understandable considering that not all ICOs have been successful.

A study by Ernst & Young showed that among 372 ICOs, only 5 percent followed through with plans spelled out in their white papers. Even worse, 10 percent or $400 million of the $3.7 billion that was raised was lost or stolen by hackers.

The study, which was released in December, noted that most ICO white papers lacked clear explanations and, as a result, most plans are never implemented. Investors are driven by a “fear of missing out,” a phenomenon so important to the industry that it has been given its own acronym, FOMO.

In fact, 276 companies out of all 900 that did ICOs last year ended up shutting down - after successful ICOs.

Yet despite the risks, companies in many countries are raising capital via ICOs.

Some analysts say Korea’s ban is forcing investments and job opportunities out of the country.

Switzerland, which is very supportive of ICOs, has been attracting talent and investments.

The Swiss financial authority last month became the world’s first to lay out guidelines on how ICOs are conducted.

According to Pricewaterhouse Coopers, among the top 10 ICOs last year, four were based in Switzerland while other countries such as the United States and Singapore are also actively joining in.

A Coindesk study shows that in the first 10 months of last year, the United States topped the chart in investments raised through ICOs, with $580 million. Switzerland closely trailed behind with $550 million during the same period and Singapore took third place with $184 million.

The French Financial Market Authority (AMF) released its own guidelines recently. French authorities said they will be reviewing and licensing companies that are preparing for ICOs.

Because of the ban on ICOs by the Korean government, many Korean companies have opened up offices overseas in order to do ICOs.

One such example is Hyundai BS&C, founded by Chung Dae-sun, grandson of Hyundai Group founder Chung Ju-young. The blockchain-based IoT platform developer set up an office in Switzerland and succeeded in raising 300 billion won in investments.

Other major companies are doing the same including Korean game company HanbitSoft, which earlier this month announced the opening up an office in Hong Kong. It is looking to do an ICO through Bryllite Coin.

“In a more globalized world, a single country can’t prevent changes that are happening elsewhere,” said Lim Jung-wook, managing director of Startup Alliance. “Even in China, where ICOs are banned, start-ups are raising investments via ICOs [overseas].”

Lim said the approach that the government should be looking at is not prohibiting ICOs but studying the kind of regulations that can protect investors.

“The regulations should work in a way that would help investors find proper start-ups that actually need investment,” Lim said.