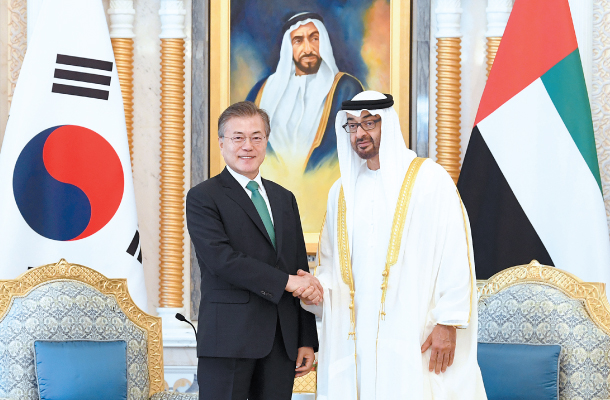 Leaders of Korea and the United Arab Emirates (UAE) agreed Sunday to elevate their bilateral relations to a special strategic partnership during a summit in the capital city of the Middle Eastern nation.

President Moon Jae-in met with Sheikh Mohammed bin Zayed bin Sultan Al Nahyan, the crown prince of Abu Dhabi, for a summit and agreed to upgrade the two countries’ ties to the next level. Currently it is a strategic partnership.

The UAE is the third country Korea formed a special strategic partnership with after India in 2015 and Indonesia in 2017.

“I am confident that Korea-UAE relations will advance further in various areas through the president’s visit,” the crown prince said in his opening remarks for the summit.

“I am extremely thrilled to visit the UAE as my first Middle East destination since I took office,” Moon replied, expressing his appreciation for the opportunity to discuss advancement of bilateral relations.

The two countries also agreed Sunday to establish a consultation channel between their vice ministers of foreign affairs and defense to address a controversy surrounding a secret military deal the Moon administration inherited from one of his predecessors.

Kim Tae-young, who served as defense minister in the Lee Myung-bak administration, told the JoongAng Ilbo in January that a secret military pact was signed in 2009 before the UAE awarded an $18.6 billion contract to Korea for its first nuclear power plant.

Kim said the pact, which includes a clause that guarantees the Korean military’s automatic intervention in any emergency in the UAE, was signed in the form of a memorandum of understanding in order to avoid the treaty ratification process by the National Assembly.

In a New Year’s media conference, Moon said he was willing to respect the secret nature of the pact. He said he wanted to consult with the UAE to revise any flaws in the agreement.

“The communication channel for foreign and defense vice ministers agreed today is a starting point to carry out related discussions in the future,” a Blue House official told the JoongAng Ilbo on Sunday.

Presidential Chief of Staff Im Jong-seok accompanied Moon to the summit. Im was dispatched to the UAE last year as a special presidential envoy to meet with the crown prince and discussed the two countries’ pending issues, including the nuclear plant and the military pact.

In January, the crown prince sent his confidant, Khaldoon Al Mubarak, chairman of the Executive Affairs Authority of the Government of Abu Dhabi, to Seoul to follow up on the discussion.

During the summit, Moon also promised to expand Korea’s cooperation with the UAE in areas beyond energy. He promised to cooperate in science and information technology as well as renewable energy and patent administration, and five memoranda of understanding were signed by the two leaders on those issues.

“Moon asked the UAE to invite more businessmen to the event,” said a Blue House official. “It is the special nature of a monarchy that friendships with the royal family are important for business. It was Moon’s attempt to help them.”

Following the summit and luncheon, Moon met with other UAE leaders including Khaldoon and Sultan Ahmed Al Jaber, minister of state and the director-general and CEO of the Abu Dhabi National Oil Company (Adnoc Group), to discuss further cooperative efforts in energy projects. Adnoc is in charge of the UAE’s oil industry.

Later in the day, Moon was scheduled to have a dinner with 130 Korean residents in the country.

On Monday, Moon is to attend a commemoration ceremony to mark the completion of the first reactor in the Barakah nuclear power plant.

Earlier this month, Moon had an interview with WAM, a state-run media outlet in the UAE, and praised the project. “The Barakah nuclear power plant has been playing its namesake role as a divine blessing in our bilateral relations, indeed,” Moon said.

Moon is scheduled to visit the Akh Unit, Korean troops deployed to the UAE, on Tuesday.