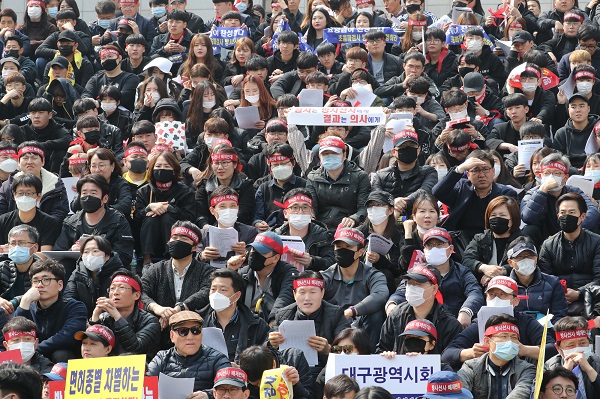 People at a rally against health insurance reforms wear masks to protect their lungs from fine dust particles on Sunday in Gwanghwamun Square, central Seoul. Many parts of the country were blanketed by fine dust-laden smog over the weekend, forcing people to stay indoors or wear masks. [YONHAP]

Much of Korea was blanketed with fine dust over the weekend, prompting many to stay at home to avoid breathing air that could cause a variety of respiratory diseases.

Korea saw its fine dust level surge on the final weekend of March to an alarming level, with Seoul seeing a daily average of more than 100 micrograms of PM 2.5 fine dust particles per cubic meter on Sunday. But the bad air extended across the nation.

The World Health Organization described fine dust particles as carcinogenic in 2013 and recommends exposure of no more than a daily average of 25 micrograms.

PM 2.5 fine dust particles are less than 2.5 micrometers in diameter, about 30 times smaller than the width of a human hair, and can travel through the respiratory tract into the bloodstream.

In Seoul, the PM 2.5 fine dust level jumped to 148 micrograms at one point Sunday, according to Air Korea, a state-run air quality watcher.

Gyeonggi’s daily PM 2.5 level as of 3 p.m. Sunday stood at 110 micrograms while Incheon’s was 94 micrograms.

When the PM 2.5 level is above 100 micrograms, the air quality category falls to “very bad,” in which case people are advised to stay indoors.

Fine dust pollution is a recurring and growing problem for Korea, especially during the winter and spring seasons when yellow dust from China is added to domestic causes of pollution. The problem is especially acute in Seoul and Gyeonggi with a population that exceeds 20 million.

The alarming dust level prompted the authorities to issue a bad air advisory for Seoul at 8 p.m. Saturday, which was still in effect as of press time Sunday.

The Environment Ministry requested regional governments to take action in accordance with guidance to ensure clean air, such as stopping garbage incineration, reducing hours of public utilities and encouraging people to stay indoors.

Alarmed by the dust levels, the Seoul city government declared on Sunday it will close all public parking lots and restrict drivers’ car use to every other day on Monday in an emergency anti-dust measure.

Some pleaded with the Blue House to work harder to tackle the problem. In one post on the Blue House’s online petition board Saturday, a writer implored the Moon Jae-in administration to lodge a protest with the Chinese government.

“People here are dying because of fine dust produced by China,” protested the writer. Some 12,000 people endorsed the post as of 4 p.m. Sunday since its posting a day before.

The fine dust is forecast to stay over the nation on Monday with no signs of rain, according to the air forecaster.

“The density of fine dust in the central region is expected to be high on Monday due to the accumulation of domestic air pollutants and static atmospheric movement,” forecast Air Korea on Sunday.