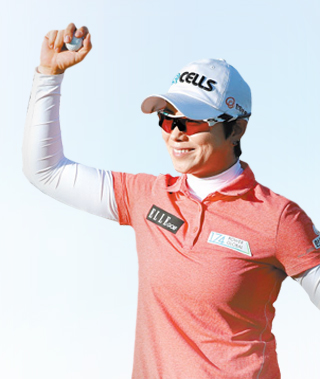 With a hole in one on the 14th, Ji Eun-hee secured her fourth LPGA Tour victory at the Kia Classic in Carlsbad, California, on Sunday.

Ji started the final round tied for the lead with Kim In-kyung and Lizette Salas of the United States. With a birdie on the par-4 fourth, Ji quickly took the sole lead. She continued to widen it with three consecutive birdies from the par-3 sixth to par-5 eighth holes.

While Ji held the lead, Cristie Kerr of the United States, who was playing three groups ahead of Ji, made birdies continuously and eventually got behind Ji by just a shot.

But Ji was relentless and extended her lead on the par-3 14th with a hole in one. From 166 yards, she took out her seven iron and landed the ball right in front of the green, which slowly rolled right into the hole. The money shot allowed Ji to extend her lead to three shots over Kerr - and won her an SUV.

Although Ji made bogeys on the par-4 15th and par-4 18th, they did not affect her much. The 31-year-old Korean finished the final round at 67, five under par, and the tournament at 16 under par, two shots ahead of runners-up Kerr and Salas.

“I hit it pretty well,” Ji said according to the LPGA. “I drove the ball very well and putted great.”

“I’m really pleased,” Ji said. “You know, things just went Eun-hee’s way today. I kept fighting and I woke up a little late, started making birdies on the back nine. Overall, I putted a lot better than I did yesterday. Didn’t miss any short ones. Four rounds in the 60s I think is pretty good thing for me. Bogey-free on a Sunday? I couldn’t ask for anything better.”

This is her first victory in five months since the Swinging Skirts LPGA Taiwan Championship. The Kia Classic title earned her $270,000 in prize money - and another car, meaning Ji was bringing home two cars from the tournament.

After winning two tournaments on the Korean tour, Ji debuted in the LPGA in 2007. Only in her second year did she win her first tournament, the Wegmans LPGA. In 2009, Ji won the U.S. Women’s Open, but since that major title, she hadn’t won a single event, the result of a swing change. Throughout her eight-year slump, the best finishes that Ji had were runner-up.

And up until Swinging Skirts in October, 2017, Ji only had two top-10 finishes in the 2017 season - at the Texas Shootout in April and Walmart NW Arkansas Championship in June. This season, prior to Ji’s victory on Sunday, Ji’s best finish was tied for 20th at the Bank of Hope Founders Cup on March 15.

Since the Kia Classic was held right before the LPGA Tour’s first major tournament of the year, the ANA Inspiration, fans now have higher expectations for Korean golfers on the tour. Ji’s victory came on the heels of Park In-bee’s win at the Bank of Hope Founders Cup on March 18.

At the Kia Classic, three other Korean golfers - Lee Jeong-eun, Choi Hye-jin and Ko Jin-young - finished inside the top 10. Park In-bee, who completed a career Grand Slam in 2015, finished tied for 18th.

Park Sung-hyun, in her second year on the LPGA Tour, missed the cut, shooting two over par in the first two rounds. This was Park’s first missed cut in 35 tournaments since she first competed in the LPGA.

The tour heads to Rancho Mirage, California, next for the ANA Inspiration from March 29 to April 1.