Air pollution couldn’t stop baseball fans from attending the season opener of the Korea Baseball Organization (KBO) over the weekend. Despite dangerously high levels of fine dust, the crowd at opening weekend was the second highest in KBO history, a total of 188,407 spectators across Saturday and Sunday.

And it was an explosive opener to boot, with last year’s season champions felled by the bottom-ranked team in the league. The KT Wiz defeated the Kia Tigers 5-4 in their first game on Saturday in Gwangju, the home of the Tigers. Kang Baek-ho of the Wiz hit the league’s first home run of the season, followed by another dinger by Hwang Jae-gyun.

But call it opener’s luck if you will. On Sunday, the Tigers responded with a blistering 14-1 victory over the Wiz. Yang Hyeon-jong of the Kia Tigers gave up one run and four hits in seven innings for his first win of the season. Along with strong pitching on the mound, the Tigers had a strong batting lineup, hitting four home runs and 16 hits. Those hoping for an underdog story will have to wait.

Meanwhile in Incheon, the SK Wyverns kicked their season into high gear with two wins at home against the Lotte Giants. Despite having the strongest batting lineup in the KBO, the visiting Giants lost 6-5 on Saturday and were unable to score at all on Sunday, allowing a shutout win to the Wyverns. Jeong Jin-gi, Na Ju-hwan and Han Dong-min made three home runs against Giants rookie Yun Sung-bin. The pitcher nonetheless made a satisfactory debut, giving up five walks, five hits and two runs while striking out six.

The NC Dinos were the only other team to win both their games during opening weekend, defeating the LG Twins 4-2 and 7-1 in front of a roaring home crowd in Changwon, South Gyeongsang. 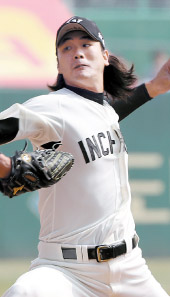 An elbow surgery in 2017 robbed Kim Kwang-hyun of an entire season. A win on Sunday marked his triumphant return.

It had been nearly a year and a half since Kim last pitched a game, and he could have not asked for a better comeback. Taking the mound as the Wyverns’ starting pitcher, the 29-year-old southpaw gave up three hits and no runs while striking out six against the Lotte Giants.

The last time Kim picked up a win as starting pitcher was Sept. 4, 2016. Then an injury to his left elbow put him out for a season. Kim wanted to return sooner, but the Wyverns didn’t want to rush his recovery.


In his first game back, Kim made 78 pitches, throwing a peak of 152 kilometers per hour (94.4 miles per hour). Until the fifth inning, Kim showed no signs of trouble. None of the Giants’ batters got to second base.

Although Kim could have pitched two to three more innings, manager Trey Hillman decided to substitute him with Seo Jin-yong. The Wyverns said they would limit Kim’s playing time this season to a range of 100 to 110 innings to preserve his arm.

“I got nervous when I got on the mound since it’s been a while,” Kim said after the game. “I felt like a rookie. I’ll prepare well so the team can have a better record this season.”

Before the start of the season, Kim said he would cut his signature long hair after his first win. On Sunday, Kim kept that promise and donated his hair to a cancer nonprofit.

Kim’s return has made the Wyverns among the likely teams - along with the Kia Tigers and Doosan Bears - to be season champions. Last year, the Wyverns had the highest number of home runs, 234, and the pitching rotation is stronger this year with Merrill Kelly, Kim and Angel Sanchez.