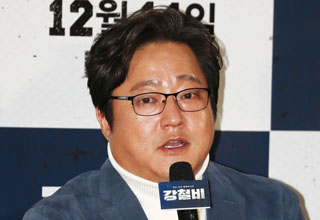 Lim Sa-ra, the agency CEO who used to work as a public defender for sexual abuse victims, posted on her Facebook page Sunday that her previous career allowed her to intuitively distinguish “gold diggers” from “real victims.” She claimed that the four women had threatened Kwak for money while meeting him last Friday.

The four women had reached out to Kwak, who was a senior of theirs at the Street Theatre Troupe, after he came out to publicly support the Me Too movement. They have all come forward as sexual abuse victims of director Lee Youn-taek.

Lim accompanied Kwak to the meeting with the four women and claimed they demanded money from the actor.

However, Lee Jae-ryung refuted the claim, arguing that the four women “only wanted to speak to Kwak and be comforted by him, but Lim treated them as if they were there for money.”

“Ever since we filed a lawsuit against Lee Youn-taek, many people have offered to help, but we’ve been rejecting them as we didn’t want our intentions to be misunderstood,” said Lee Jae-ryung, who was also a victim of alleged sexual abuse by Lee Youn-taek while working for his troupe.

Lim spoke with local outlet Star News on Monday saying that she has a recording of Lee admitting that there were conversations between the four actors and Kwak about him helping them out financially. Lim added that although it is a fact that Kwak has been blackmailed, she won’t file a lawsuit as she doesn’t want this case to “damage the essence of the Me Too movement.”