KDB calls on Kumho’s employees to agree to sale

KDB calls on Kumho’s employees to agree to sale 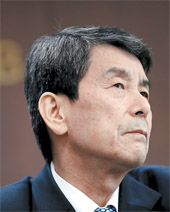 A state-run creditor of Kumho Tire on Monday called for the troubled tiremaker’s employees to vote on the planned sale of a majority stake in Kumho Tire to China’s Qingdao Doublestar.

Lee Dong-gull, chairman and CEO of the Korea Development Bank (KDB), told reporters that some office employees of Kumho Tire have backed the planned sale, which is strongly opposed by the tiremaker’s labor union.

The union of Kumho Tire has launched a strike against the planned sale.

KDB said the union must accept the planned sale by the end of the month.

If not, Kumho Tire will be put in court receivership, Lee said.

Doublestar was chosen as a preferred bidder to buy a controlling stake in Kumho Tire last year, but the deal was terminated after the Chinese firm demanded a cheaper price.

With just four days before the deadline, Kumho Tire’s union has shown no signs of accepting the planned sale.

If Doublestar buys the stake in Kumho Tire, KDB’s Lee said the creditor will consider giving stock options to employees.