Vietnam is the latest target for Lotte and CJ

Vietnam is the latest target for Lotte and CJ 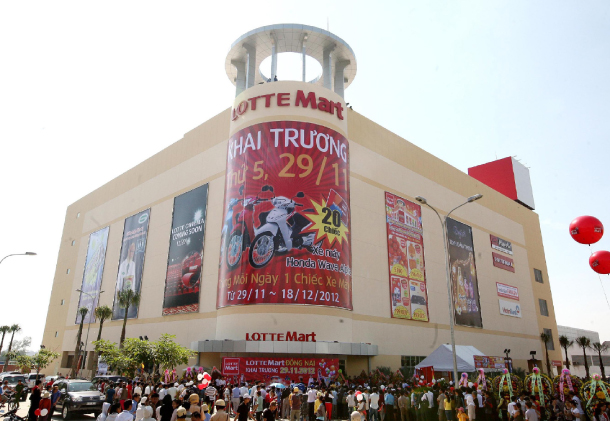 The third Lotte Mart in Vietnam, which was opened in 2012 in Bien Hoa, east of Ho Chi Minh City. The Korean retailer is expanding its business in the Southeast Asian country. [LOTTE]

Korean food and retail companies are shifting their focus from their struggling ventures in China to Vietnam, sensing opportunity in the Southeast Asian country’s young consumers, many of whom are interested in Korean pop culture.

Lotte said it aims to raise the number of Lotte Mart outlets in Vietnam to 87 by the end of 2020 from the current 13.

Meanwhile, the Chinese government has retaliated against Korean products, cultural exports and tourism after Seoul, against Beijing’s objections, deployed the U.S. Terminal High Altitude Area Defense (Thaad) antimissile system. Korean retail giant Lotte has been negotiating the sale of its hypermarket chain in China after it suffered major losses with no sign of recovery.

Lotte Group was the biggest victim of Beijing’s retaliation, as it signed a land-swap deal with the Korean government to provide a golf course as the host site of the U.S. missile defense system.

Most of its 99 Lotte Mart discount stores in China have suspended their operations for more than one year and Lotte Group suffered about 1.2 trillion won ($1.1 billion) in lost sales.

Helped by a bilateral free trade agreement (FTA), which came into effect in 2015, Korean exports to the Southeast Asian country have been growing rapidly for the past several years.

Korean products accounted for just 8.5 percent of Vietnam’s import market in 2007, and their portion hit an all-time high of 22.1 percent in 2017.

Lotte Group has been operating department stores, hotels and cinemas in Vietnam since 1998.

It is also building Eco Smart City, to be completed by 2021, on about 100,000 square meters (24 acres) of land in Ho Chi Minh City with an investment of over 2 trillion won. The development will include a department store, shopping mall, hotel and office and residential buildings.

Lotte also plans to invest 330 billion won in the development of the Lotte Hanoi project on 73,000 square meters of land by 2020, featuring a department store, a shopping mall, a mart and cinemas.

Emart, which completed the sale of scores of its outlets in China last year, has successfully run a store in Ho Chi Minh City since 2015 with an eye on expanding to nearby Myanmar and Cambodia in the near future.

Korean products are the biggest sellers at the Emart store to Hallyu, or the growing wave of Korean culture abroad, an Emart official said.

Korean food and entertainment conglomerate CJ Group has been actively expanding its business in Vietnam in recent years, hoping that Vietnam could serve as a springboard for an expanded presence in Southeast Asia.

The company invested 70 billion won in the construction of a food processing factory in Ho Chi Minh.

The factory will be completed in July. It will produce Korean dumplings and other frozen foods, and kimchi, the traditional Korean side dish made from fermented cabbage, radishes and hot peppers.

CJ Freshway, a food distribution and catering affiliate of CJ Group, posted sales of 49 billion won in Vietnam in 2017, up from 1.8 billion won in 2012, when the company began business there.

“We expect a growing number of Korean businesses will expand investment in Vietnam, the land of opportunity,” an industry source said. “Vietnam’s economy has been expanding by more than six percent every year, it is a young consumer market whose average age is 30 and Hallyu is gaining popularity.”