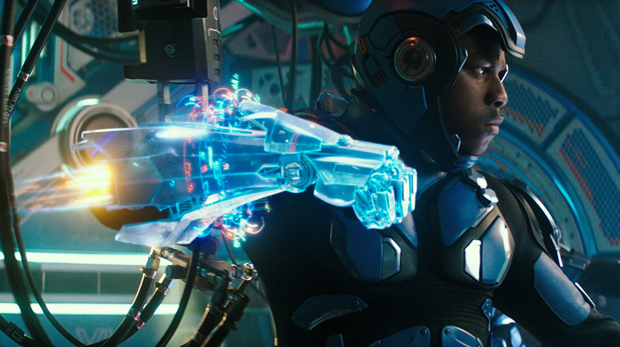 The monsters vs. robots science fiction sequel “Pacific Rim Uprising” modestly landed atop both Korean and North American box offices, dethroning romance flick “Be With You” and “Black Panther,” respectively.

The follow-up to the first “Pacific Rim” film, which was released in 2013 and directed by Guillermo Del Toro, sold 655,000 tickets over the weekend at 1,143 screens in Korea, accounting for 39.8 percent of the entire weekend’s sales. Since its release on Wednesday, the Universal Pictures-Legendary Entertainment release, which cost $150 million to make, has sold a total of 858,000 admissions. Del Toro was originally slated to direct the movie, but instead advised as a producer, handing over directing duties to Steven S. DeKnight, who served as the showrunner on the first season of Marvel-Netflix’s “Daredevil.”

Coming close in the local box office was “Be With You,” starring Son Ye-jin and So Ji-sub. Adapted from a Japanese novel, “Be With You” sold 577,000 tickets at 1,190 screens during the three days, accounting for a close 33.9 percent of the entire weekend ticket sales. Through its second weekend, the heart-wrenching love tale has sold a total of 1.82 million.

Far behind was thriller “The Vanished.” The adaptation of the Spanish flick “The Body” has benefitted from a relatively quiet box office period since its release on March 7. In its third weekend, the movie, about the search for a body that has gone missing from a morgue, sold 93,000 tickets, bringing its total ticket sales to 1.29 million.

In North America, “Black Panther” has finally been unseated as the top film at the box office with $28 million in ticket sales, according to studio estimates Sunday.

And even though “Black Panther” slid to second place with $16.7 million in its sixth weekend, Ryan Coogler’s film notched another box-office milestone. It’s now the highest-grossing superhero film ever in North America, not accounting for inflation. The film’s $631 million in domestic ticket sales has surpassed the $623 million made by 2012’s “The Avengers.” “Black Panther” also becomes the fifth-highest grossing film of all time, rising above “Star Wars: The Last Jedi.”

The record-breaking hit “Black Panther” has been followed by a string of lackluster performers, including “Tomb Raider” (currently No. 5), “A Wrinkle in Time” (No. 6) and “Red Sparrow.”

“Pacific Rim Uprising” may have taken down “Black Panther,” but a blockbuster heir still hasn’t been found. Next weekend, Steven Spielberg will try with his big-budget virtual-reality spectacle “Ready Player One.”

MGM and Paramount Pictures’ animated family sequel “Sherlock Gnomes” disappointed with a fourth-place $10.6 million debut. Forecasts had been higher for the sequel to “Gnomeo & Juliet,” which grossed $194 million worldwide in 2011.

The results were also modest for Steven Soderbergh’s “Unsane,” a psychological thriller starring Claire Foy (“The Crown”) that the director shot with iPhones. The Bleecker Street-Fingerprint releasing film opened with $3.9 million in 2,023 theaters. Though both were inexpensively made, neither of Soderbergh’s first two films following his brief retirement from Hollywood has made much of a dent at the box office. Last year’s “Logan Lucky,” starring Channing Tatum, tapped out at $27.8 million domestically.

But there were also bright spots. The Christian drama “I Can Only Imagine” held especially strong in its second weekend. The Lionsgate-Roadside Attractions release grossed $13.8 million, bringing its two-week total to $38.5 million and putting it in third place. “I Can Only Imagine” has emerged as the clear faith-based film of choice ahead of Easter, likely to the detriment of “Paul: Apostle of Christ,” which took in $5 million this weekend for Sony’s Affirm Films.

And in limited release, Wes Anderson’s stop-motion animated “Isle of Dogs” got off to a healthy start with $1.6 million in 27 theaters. Fox Searchlight, coming off its best picture win at the Academy Awards for “The Shape of Water,” carefully selected the opening weekend theaters to cater to Anderson’s die-hard fans.