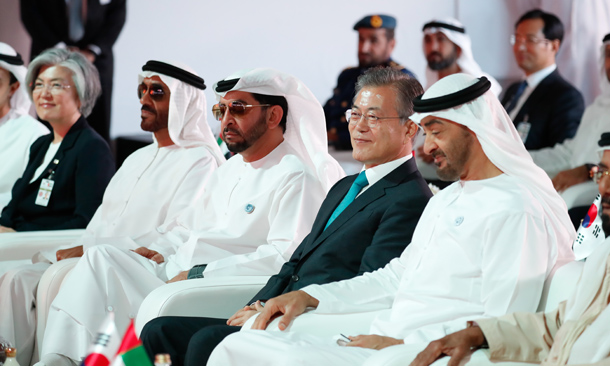 President Moon Jae-in attended a ceremony marking the completion of a Korean-built nuclear reactor in the United Arab Emirates on Monday.

Moon’s visit came nine years after the state-owned Korea Electric Power Corporation (Kepco) won a $18.6 billion bid from the UAE to build four 1,400-megawatt nuclear reactors in Barakah, about 270 kilometers (170 miles) west of the capital of Abu Dhabi. The Middle Eastern country has set a goal of generating 25 percent of its energy from nuclear power by 2021 to lower its reliance on petroleum. The Barakah project is the world’s single largest nuclear power plant project in terms of capacity.

In 2016, Kepco also won a bid to operate the Barakah complex for 60 years. The deal is expected to bring Kepco $49.4 billion in total revenue.

The reactor that went into operation Monday was the first of four. The other three are set to be complete by the end of 2020.

Moon told construction workers after the ceremony that the Barakah project bore “important meaning” because it is the first nuclear reactor in the UAE and Korea’s first time exporting its nuclear technology.

“In contrast to many nuclear reactor construction projects that have been delayed or ground to a halt, the Barakah project has become a model to follow in every aspect such as construction time, safety and economic feasibility,” Moon said according to Yonhap.

“We adopted nuclear power plant technology from the U.S. and have developed it further with indigenous technology,” Moon said. “We will assist the UAE in walking along the same path.”

With the completion of the first Barahka reactor, Korea is setting sights on winning another lucrative nuclear power plant bid from Saudi Arabia, which aims to build 16 reactors by 2032. Construction of the first two is set to begin next year, and Saudi Arabia plans to choose the builder for them by the end of the year. The bid is estimated to be worth $20 billion.

The two countries also agreed to establish a consultation channel between their vice ministers of foreign affairs and defense to address a controversy surrounding a secret military deal that the Moon administration inherited from one of his predecessors.

Kim Tae-young, who served as defense minister in the Lee Myung-bak administration, told the JoongAng Ilbo in January that a secret military pact was signed in 2009 before the UAE awarded the nuclear power plant contract to Korea.

On Tuesday, his final day in the UAE, Moon is scheduled to meet with Mohammed bin Rashid Al Maktoum, prime minister of the UAE prime minister and ruler of Dubai, before returning to Korea.