‘Nobody really asked us how we felt’

‘Nobody really asked us how we felt’ 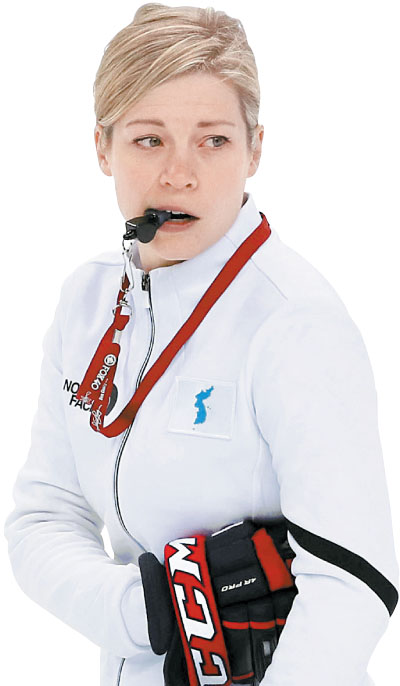 Until the inter-Korean women’s ice hockey team was created, barely anyone had heard of Sarah Murray. First appointed as the head coach of the Korean women’s ice hockey team in September 2014, Murray has slowly worked away in the background to develop the players to a level that would allow them to qualify for the PyeongChang Olympics. Once the decision was made to create a unified team, Murray and her players suddenly became one of the most talked about people at the Games.

For some, the Korean women’s ice hockey team were the victims of political maneuvering, the cost of a possible rapprochement between the two Koreas. Disagreement over the decision to create the team reached a height when Prime Minister Lee Nak-yon justified the team’s creation, saying they were “not in contention for a medal.”

Although Lee’s comment proved to be true - the team lost all five of its games - the unlikely squad gained a strong fan following and the South Korean players built friendships with their North Korean counterparts.

Murray was only 26 years old when she started coaching the Korean women’s ice hockey team in 2014. Though she comes from a hockey family - her father Andy Murray is the former head coach of the Canadian men’s ice hockey team and her brothers played in the National Hockey League (NHL) - it wasn’t easy for her to take over the role of head coach after years as a player.

The JoongAng Ilbo, an affiliate of the Korea JoongAng Daily, met with Murray at Jincheon National Training Centre in North Chungcheong on March 12 to talk about her experience with the inter-Korean team. Murray, who has recently renewed her contract, had just held the first training session for Korean women’s first team since the PyeongChang Games. Below are edited excerpts of the interview.

Q. How do you feel about the Olympics and what did it mean to you?

A. Now that it’s over, it’s hard to believe that it actually happened, that the North came and we were combined. It’s still shocking to me that it happened. What an honor for us and we brought so much attention to the game, not only in Korea but in the world. Everyone was watching and talking. It was great for the sport. I think in Korea, too, we got a ton of interest.

What was the most impressive moment at the Olympics?

I think obviously Randi [Griffin] getting that first goal was huge for us. Like the pressure was almost worth it for us that we got the first goal. Especially against Japan, it’s always nice. But I think a lot of moments were not on the ice, just our players interacting and coming together. There was a really special moment here at the training center in a video meeting when our players started teaching the North players. They started talking and started trusting each other. I think that moment was more special than anything. Scoring is good but I think that moment where the team started talking and coming together, it was really good.

You’ve been here for four years. Before the Olympics, most people didn’t know who you were and now, everyone knows who you are. Do you think that you had the most benefit from the inter-Korean team?

I think it’s weird. When people ask for a picture with me, I ask them, “are you sure you want a picture with me?” I don’t know. I didn’t make the decision for the team to be combined. And our players are really the ones that made it work so I kind of felt uncomfortable when people were giving me so much attention.

How did the team’s goals change in the run-up to the Olympics?

When we first started, we were just happy to be there and wanted to have no regrets. We didn’t really care if we won or lost. And then, last year around December, we had another meeting with the players and we asked them “what’s your goal for the Olympics?” They said they wanted to win, wanted to advance out of their division and definitely wanted to beat Japan. They thought we had a good chance of maybe beating Switzerland or Sweden if we played really well.

Unfortunately, it didn’t work out that way, but [I still] thought our players did a really good job. In the first few games we were nervous. There was a ton of pressure on our team. Twelve players [were added] to the roster ten days before.

It’s not an excuse, but the first two games weren’t our best. We got better as the tournament went on.

Did playing as an inter-Korean team affect the goal?

I think just all the media attention. Getting a police escort to the first game against Sweden. One side of the road is rioting because they don’t like the North and one side is cheering because they like the unified team. I think our girls were just emotionally drained before the game even started.

When was the first time you heard about the inter-Korean team?

[Coach Kim] Do-yun called me when I was in Minnesota and said, “we have a big problem.” When they told me, I didn’t really believe it because nobody from the government talked to us. They didn’t talk to our team and they didn’t talk to [the Korea Ice Hockey Association]. There were rumors going around but nobody talked to us. So I thought when somebody talks to us, then it would happen. When I landed at the airport, I had all those interviews and I didn’t know any information so I was trying my best to answer all the questions but we really didn’t know what was happening.

There were negative opinions regarding the inter-Korean team. How did you feel about it?

It was really nice for our players to get so much support from people that didn’t even know us and just hearing our situation and our story, they supported our team. We had no control over this situation at all. Nobody really asked us how we felt. It kind of just happened to us. It was tough, but it was really an amazing opportunity to get to know all the North [Korean] players and help them. The last day when the girls left, all of our players were crying and hugging. That wouldn’t have happened if the decision wasn’t made. It makes me mad, the reasons why it happened, but it did happen and it ended up being an amazing experience.

What was the hardest thing about coaching the inter-Korean team?

It was hard because we had to do two practices. At the start, we had the team divided in half. Once we started getting close to the Olympics, we put together a game roster and we had kind of our practice roster, the players that might not play in the games. It was hard to keep the girls motivated and excited. I think that was the toughest moment when we had to make the cut and the players knew who was going to play and who wasn’t going to. We told them, “Unfortunately, three players aren’t going to [play] in [every game]. But if you do your best and earn your ice, then you don’t have to worry about not playing,” kind of leaving it up to them. Everybody got to play in one game except for [Kim Knowles], because you can only [have] two goalies.

How were Park Chol-ho, the North Korean coach, and his coaching staff?

For the first couple of days, they were very quiet, very shy because they didn’t know what to expect. Then our players at the meeting, they started talking. The coach, we were always talking to them everyday and we started talking together, laughing together. After a week, we were starting to come together as a team. They are a really great group. They want to learn and they love the sport. Every time we were talking, they were listening to all the information. The coach, he wanted to know all our schedules and he wanted to know everything. The coach was great. If it wasn’t for him, the team wouldn’t have worked. He was open to every suggestion and he made it happen. It was tough to come together but a good experience.

How did you make good chemistry between the North and South players?

The most important thing for us when the North came was we wanted everything to be the same even though they were added to the team late. We wanted them to have the same equipment, same work clothes and we wanted them to be treated exactly the same so they feel a part of our team. And then we wanted to give them the opportunity to be together. They’re not really supposed to be together all that much so going to the beach was an opportunity. Usually, we are in the rink or eating lunch together but not really having fun. The beach was a good opportunity to be girls and talk. The last day, after the closing ceremony, we met in the cafeteria and then we had McDonald’s and talked and said goodbye.

Would you go to Pyongyang if you and the team were invited?

If it was just our team going, I would consider going. But I don’t want us going just to be another political statement. It’s more friendship now. We want to help them, we want to see them again. We don’t want to go and [it be like], “look at North and South together.” We have a relationship with them now and we want to continue that with them.

It was a political decision to form an inter-Korean team. How did you feel about it?

I wish when we were talking about it in the summer, that it would have happened in the summer and then we would have had a full season together and practiced. It’s hard because our team was the only team that was combined with the North. It’s tough for our team being used for political reasons, but it ended up being good for our team and for the sport. Just by how much attention we got, everybody was watching us and everyone who didn’t know about hockey was fighting for us. It was a hard situation but I think it’s going to benefit our team in the future.

Do you think it’s a good idea to have inter-Korean teams in the future?

It has to be fair. The longer our team is together, the better. It’s hard to make a plan because we don’t know if it’s going to happen. I would like us to train together.

When you first started coaching in 2014 you were 26 years old. What were the difficulties you had as a “young coach?”

When I first came, I was really nervous. I knew [former player] Q was older than me and [Han] Soo-jin was older than me. I came right from being a player to the coach of a national team, so it was a lot of pressure. But I talked to my dad about it and he said, “Even if you’re younger than them, you have totally different experience. You played hockey in the U.S., Canada and you went to college, you played in the national championship game. Even though you’re younger, you can teach them something that they don’t know.”

So I really used that and thought, “I’m just going to give them my experience.” It ended up working well because I didn’t realize there were a lot of things that I was teaching that was new, so that worked well.