Taeguk Ladies are set on the World Cup

Taeguk Ladies are set on the World Cup 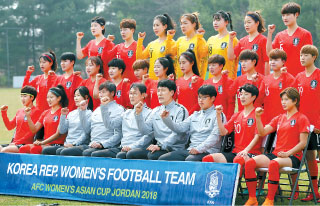 The Korean women’s football team poses for a photo at the National Football Center in Paju, Gyeonggi, on Tuesday. [YONHAP]

Korean women’s football coach Yoon Duk-yeo said Tuesday that his side is determined to qualify for the 2019 FIFA Women’s World Cup in France.

Yoon’s team will depart for Jordan on Thursday to compete in the 2018 Asian Football Confederation (AFC) Women’s Asian Cup, which will be held from April 6 to 20.  The competition will double as the final Asian qualifier for the 2019 World Cup in France, with the top five nations qualifying for the marquee event in women’s football.

Yoon already unveiled his 23-player roster earlier this month, and the players have been training at the National Football Center (NFC) in Paju, north of Seoul, since March 15.

“It’s very important for us to make two consecutive World Cup appearances,” Yoon told reporters at the NFC in Paju, Gyeonggi. “We hope we can deliver good performances to fans who support women’s football.”

At the AFC Women’s Asian Cup, Korea is in Group B, and will face defending champions Japan along with Australia and Vietnam.

Yoon said the opening match against Australia on April 7 is the most important. The 57-year-old coach said the players will know how to handle the physical Australians after playing European opponents at the Feb. 28 to March 7 Algarve Cup in Portugal.

At the AFC event, the top two teams from the two groups will reach the semifinals, and the third-place teams from each group will square off in the fifth-place match for the last spot in the FIFA Women’s World Cup.

Yoon, who has been leading the women’s national football team since 2013, said he is confident that his players will accomplish the task of reaching the World Cup.

“We will try to reach the last four and secure the World Cup ticket,” he said. “I’ve spent a long time with the players, and now they know what I want. We understand each other well.”

“We really fought hard in Pyongyang, and if we didn’t earn a good result, we wouldn’t be here,” he said.

The Taeguk Ladies were scheduled to play a practice match with male players from Neunggok High School on Tuesday. Yoon said the match will help his players to cope with their physical opponents at the Asian Cup.

“I think the level of our women’s football has been upgraded,” he said. “Whether it’s men or women, the quick tempo has been an important factor in football, and we’ll try to follow that trend.”