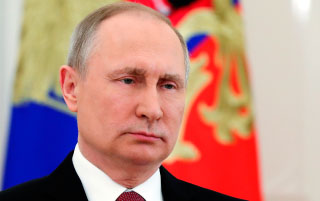 Russian President Vladimir Putin during a live televised speech in Moscow on March 23. Russian election officials have officially declared Putin the winner of the election on March 18. [AP/YONHAp]

On March 18, the fourth anniversary of Russia’s annexation of Crimea, Vladimir Putin was elected to a fourth term as president of Russia. Including his four years as prime minister, Putin will have been in power for 24 years. Foreign media outlets have called it a completion of the “czar system.” One said Putin was no longer a president but in the ranks of Lenin and Stalin.

Amid controversy over fairness, the election was held under the surveillance of representatives from the Organization for Security and Cooperation in Europe and observers from 65 countries that Russia invited. Leaders from China, North Korea, Germany, France, Italy, India and Japan sent congratulatory messages. U.S. President Donald Trump called Putin to congratulate him on his victory and faced political backlash at home for the call.

Putin was elected with 76.7 percent support, 13 percentage points higher than in the 2012 election. Turnout was high at 68 percent, and he received overwhelming support from major cities, winning 71 percent of votes in Moscow, compared to 47 percent in the previous election, and 75 percent in Saint Petersburg, up from 59 percent in 2012.

Until right before the election, polls friendly to the Kremlin estimated Putin’s support to be in the mid-60s, but the outcome was a landslide victory of nearly 77 percent. At the end of the campaign, voters showed overwhelming support. What contributed to the unexpected outcome?

First of all, geopolitical issues affected the election. For an “aggressive defense” against NATO’s eastward move, Putin annexed Crimea. By making the eastern part of Ukraine a conflict zone, he blocked the spread of Western influence and defended Russia’s core interests. Analysts say that the determined moves earned wide support from Russians.

While Western sanctions have been maintained and tightened, Russians have acknowledged Putin’s ability to control crises. Despite sanctions, the Russian economy is growing thanks to booming industries that replaced imports and an improved service sector. Manufacturing is alive and well in machinery and materials, and as global oil prices are stabilizing, Russia is growing confident in its economy.

The assassination attempts on agents in the United Kingdom right before the election helped as well. The diplomatic conflict with the British encouraged Russian voters’ antagonism toward the West and contributed to Putin’s victory.

As Putin begins a new term on May 7, he faces a number of challenges. In an interview after his election, he strongly denied intent to serve for a lifetime. It may be true, but in a political structure with power concentrated in the leader, Russia’s direction after Putin is a grave concern.

Potential successors are likely to emerge before and after the 2021 general election. The fear of chaos as a result of a new political experiment in Russia will be the price for today’s stability. The important point is to prepare for upcoming changes by expanding healthy diversity in Russian society and the autonomy of new elites. Alleviating the Russian economy’s excessive dependence on resources is another piece of homework that even Putin is unable to solve.

Improving relations with the West doesn’t seem easy for now, but Russia will continue to put effort into establishing its status somewhere between a hot war or cold war while preparing for the new world order of great changes.

One thing is clear for the Korean Peninsula. Putin’s Russia is looking eastward, and his administration is likely to continue that policy. It will be a challenge and opportunity for Korea.

With President Moon Jae-in set to visit Russia soon, can Korea be a partner in Putin’s eastward plan? Korea needs to watch Russia’s changes as a partner in economic advancement and realize the cooperative plans on which they have agreed.

Korea’s aggressive diplomacy is necessary to attain the goal of regional stability and mutual prosperity.

The author is a professor of political science and foreign policy at Seoul National University.