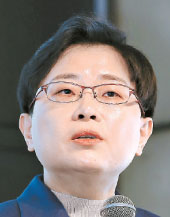 According to Homeplus, the future of grocery shopping is somewhere between a big-box warehouse and a supermarket.

The discount retailer will convert some of its branches into Homeplus Special stores, which will attempt to give families warehouse-style bulk discounts with the convenience of local grocery stores.

“Homeplus’ main target consumers are families with children,” said the company’s CEO, Lim Il-soon, during her first press conference on Tuesday in central Seoul. Lim was appointed to the CEO post in October, becoming the first female chief executive of a major Korean retail company in history.

“Homeplus Special is not just a mixture between a warehouse discount store and a grocery market,” she added. “It will innovate in its operation to cater to its demographics.”

Lim made it clear that Homeplus Special is “not a copycat” of its competitors, such as Emart Traders or Costco, warehouse-style discount chains that sell products in bulk.

“Emart and Traders are operated separately, while Special is integrated with Homeplus and will be able to offer complete value to its customers,” she said.

This year, approximately10 Homeplus stores will be turned into Specials, including locations in Daegu and Busan.

The new store’s product lineup will cater to diverse needs. It will offer products in both large and small quantities for families and people living alone.

Instead of expanding its product lineup, Homeplus said it plans to use its relationships with foreign suppliers to source premium products like imported beer and wine.

Homeplus also said it would put an end to its surprise sales events, which are used to boost demand and clear the shelves of unsold stock.

It said that it will instead implement an “Everyday Low Price” strategy to manage demand more evenly and reduce overall prices. Jumping on the in-house brand boom, Homeplus will also roll out its own value brand, Simplus.

The company is also planning on creating a new community space concept called Corners. The spaces, which will open adjacent to Homeplus stores, will host local flea markets and children’s libraries along with other events.