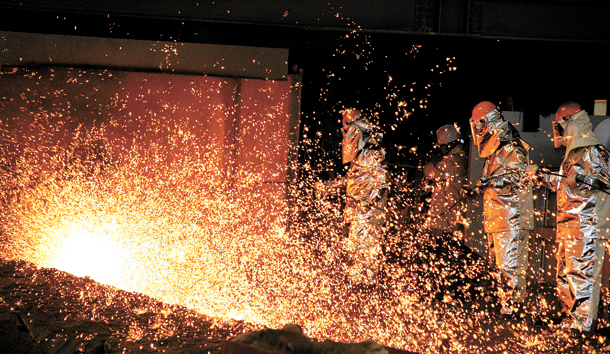 Korean steelmakers breathed a sigh of relief on Monday. The industry, which was crucial to the country’s growth in the post-Korean War (1950-1953) years, won a crucial exemption from U.S. President Donald Trump’s tough new tariffs on steel imports.

The country’s largest steel manufacturer Posco saw its shares shoot up 5.34 percent in the Korean stock market on Tuesday just a day after they went up 2.02 percent on the news that Korea and the United States settled their dispute on steel tariffs. Shares of Hyundai Steel, the country’s second-biggest steelmaker, also went up by 3.56 percent Tuesday after they closed up 2.33 percent the previous day.

However, Korean steelmakers are subject to a quota of 2.68 million metric tons a year on their steel exports to the United States. Korea is feeling lucky, though, as they are the first U.S. ally to receive an indefinite exemption on the 25 percent steel tariffs imposed by Trump.

The Korea Iron and Steel Association said that while it’s regrettable that Korea wasn’t able to secure a higher quota for steel exports, it is a “relief” that Korea has been excluded from the stiff steel tariffs.

Trump has been playing his cards well, and every steelmaking country responded to his threats as expected. In the recent trade talks with Korea, Trump achieved his goal of opening up Korea’s auto market to American-made cars.

The United States is the largest steel importer in the world. Losing that market would be a blow to any of the steel-producing countries, which are already familiar with overcapacity in the global steel industry. Manufacturers worldwide have the capacity to produce 1.7 billion tons of steel annually, but demand falls short of that total by 730 million tons.

It remains to be seen whether Trump’s strategy can successfully get U.S. steel mills to up their production. The administration hopes to raise their operation rate from 73 percent to 80 percent. One thing that was crystal clear during negotiations with the United States is that no country is willing to sacrifice their steel industry.

“The steel industry has been the core building block of every civilization,” said Min Dong-joon, a professor of materials science and engineering at Yonsei University. “Trump wouldn’t have earned such huge negotiating power if he didn’t tackle the steel industry.”

When Trump was pressing his tariffs on imported steel, he argued that protecting the American steel and aluminum industries is important to his country’s “national security.”

“If you think about it, there are not many industries that you can directly link with national security, but steel makes sense,” Min said.

Steel is used to produce everything from household appliances to cars, airplanes and trucks. It is also important in creating key national infrastructure, such as buildings and railways.

The wide use of steel and the impact the industry has on other key industries like auto manufacturing, shipbuilding, aircraft making and construction was enough to give Trump his negotiating power.

“From the ’70s, steelmakers knew there was overcapacity in the market,” said Je Hyun-jung, a researcher at the Korea International Trade Association. “There was an option to tear down steel facilities to counter overcapacity, but countries couldn’t because of the pivotal role the industry plays in supporting a country’s economy.”

Global overcapacity grew as Chinese steelmakers rapidly expanded their capacity in the 2000s. Former U.S. President George W. Bush tried imposing temporary tariffs of 8 to 30 percent on steel imports in 2002, though several countries, including Canada and Mexico, were exempted from the tariffs. If the plan had proved effective, the tariffs could have stayed in place longer, but they were lifted in 2003 over concerns that they hurt the United States’ gross domestic product and employment. The country has also tried to use antidumping tariffs and countervailing tariffs to protect its steelmaking sector over the years.

Though countries across the globe have agreed to cut their production capacity for the common good, effective reduction of steel production has been slow due because of each country’s differing interests.

The fight over steel is expected to continue, as there’s no replacement for the metal in manufacturing.

According to Min, the materials science expert, steel is the only material that is strong, formable and abundant. Other materials like titanium can perform similarly to steel, but can’t be produced in large quantities.

“In my knowledge, there is nothing that can fully replace steel,” Min said. 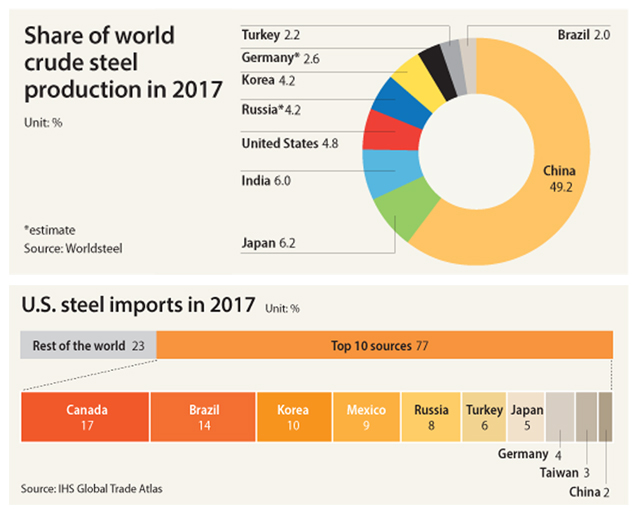 Last year, Korea accounted for 10 percent of U.S. steel imports, coming in third after Canada, which accounted for 17 percent and Brazil with 14 percent.

Korea was sixth in the world in production volume last year, with 71.1 million metric tons, according to data from Worldsteel. That’s an increase of 3.7 percent compared to 2016.

Korea’s largest steelmaker, Posco, accounted for about half of that total. The company was founded as a state-owned enterprise called Pohang Iron & Steel in 1968. Ever since its mill in Pohang, North Gyeongsang, first started punching out steel in 1973, it has driven the Korean steel industry’s growth.

Steel production in Korea continued to grow, with more local manufacturers jumping into the industry. In addition to Posco, there are currently 30 smaller steel manufacturers in Korea, including Hyundai Steel, SeAH Steel and Nexteel.

Korean steel producers, however, cannot avoid the increased competition in the global steel market caused by overcapacity, and domestic demand for steel has fallen as Korea’s economic growth has slowed.

China’s rapid growth also poses a threat to Korea’s steel industry. Since 2010, Chinese steelmakers have controlled about half of the world’s steel market, while Korean steel companies only control about 4 percent.

To overcome these challenges, Korea has embarked on a campaign to promote the quality of its steel and create more specialized products.

In 2014, Posco started developing and promoting its World Premium line of products. The World Premium steel products are those that Posco has developed and commercialized for the first time or that the company has solid technological leadership in.

GIGA Steel is strong, as it can withstand more than 100 kilograms of force per square millimeter.

It is also more malleable than other steel products with the same strength, according to Posco, which means it can be processed into a wide variety of products.

As the steel is more than three times as strong as aluminum, Posco says that carmakers don’t have to compromise on cars’ body strength to reduce weight. The company hopes that by 2019, 60 percent of its sales volume will be World Premium products.

The steel pipe exporter SeAH Steel is maintaining its competitiveness in the U.S. market by building up its sales networks, according to a spokesperson from the company.

Industry experts say that steel pipes for shale oil extraction produced in Korea are competitive with U.S. products due to their high quality and low prices. 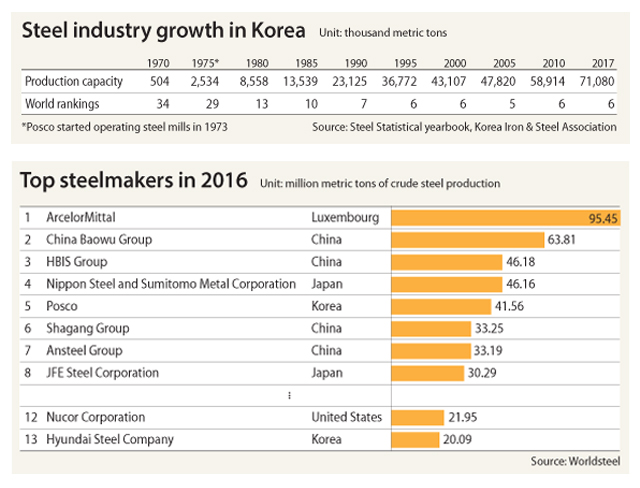 Looking to the future

Though Korean Trade Minister Kim Hyun-chong brushed off concerns about stiff tariffs on steel, Korea needs to prepare for the future. A quota on steel exports to the United States will still have a substantial impact on Korean steelmakers.

While the limit on all types of steel is about 70 percent of the average Korean steel exports to the United States between 2015 and 2017, different types of steel have to meet different quotas. Korean steelmakers are limited to exporting about half the steel pipes they used to sell to the U.S. in 2017.

“We may be in a better situation compared to other pipe makers, as we have acquired a U.S. production facility in November 2016,” a spokesperson from SeAH Steel said. “We plan to bolster production at the U.S. site for the time being and put effort into diversifying our markets in the longer term.”

The company sees potential for its products in South America and fast-developing Southeast Asia.

Dongkuk Steel, which exports galvanized steel sheets to the United States, is also looking to find new markets in the European Union and Oceania.

Korea’s largest player, Posco, has been reducing its exports to the United States to prevent losses due to Trump’s protectionist policies. Currently, only around 3 percent of Posco’s exports head to the United States, according to the steelmaker. The company is focusing on digitizing its factories to increase competitiveness and creating high value-added steel products like its World Premium line.

The Ministry of Trade, Industry and Energy is seeking to boost domestic demand for steel by constructing an advanced chemical industrial complex in Daesan, South Chungcheong.

It is also looking abroad to new markets in emerging economies in the Middle East and Southeast Asia as the American market fades in significance.