At Seoul library, a billboard with visions of pussy willows

At Seoul library, a billboard with visions of pussy willows 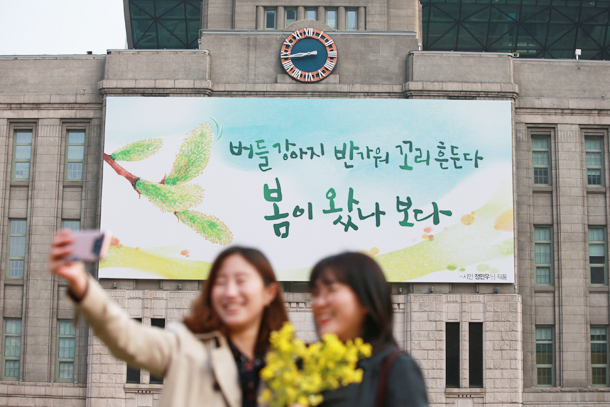 Passersby take photos in front of a new billboard welcoming the start of spring outside the Seoul Metropolitan Library in central Seoul on Tuesday. [SEOUL METROPOLITAN GOVERNMENT]

Under a choke of smog and fine dust, the Seoul Metropolitan Government welcomed spring with fanfare on Tuesday, unveiling a new billboard outside the city’s main library.

“Pussy willows are wagging their tails to welcome spring home,” the billboard read.

The message was crafted by Jung Min-woo, a 20-year-old Seoul resident. Anyone can submit a 30-character message relevant to the season or a cause to be displayed on a billboard that covers the front face of the Seoul Metropolitan Library. The city government changes the sign every few months or so.

The previous message, which was up from Feb. 25 until Monday, was dedicated to victims of sexual slavery under the Japanese military, the so-called comfort women.

“I applied a couple of times to showcase my message on the billboard outside the library,” Jung said, according to the Seoul Metropolitan Government. “I am glad that many passersby will read my message. I hope it gives them peace and comfort.”

The city government said in a statement that it selected Jung’s message because it was a fitting motif for spring. Pussy willows typically bloom around March and April in Korea.

“It was interesting that Jung likened the pussy willow to a puppy’s tail since a puppy often invokes something about life and hope in people’s minds, which is also fitting for this season,” the Seoul Metropolitan Government said.

Unlike in English, the word “pussy willow” in Korean is derived from the word for puppy.

The city worked with a local design company to come up with complementary artwork for the message. Since the government started the program in June 2013, most of the messages that have appeared on the billboard have been written by Seoul residents, according to the metropolitan government.

The new billboard will grace the library facade until the end of May. Afterward, the city government will begin receiving applications for messages related to summer.