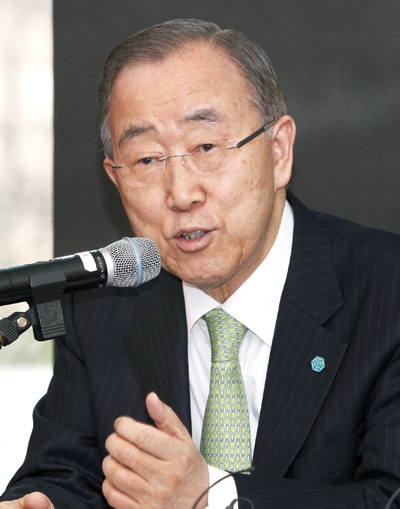 Ban Ki-moon, assembly president and council chair of the Global Green Growth Institute, speaks at a news conference at the Westin Chosun Seoul in central Seoul on Tuesday. [PARK SANG-MOON]

Former UN Secretary General Ban Ki-moon, who was recently appointed head of the Global Green Growth Institute (GGGI), vowed to expand the organization’s membership through his global connections on Tuesday and condemned certain world leaders for turning to isolationist policies.

“Twenty-eight countries is not a reasonable size as an international organization,” Ban said during his first news conference as head of the organization in Seoul. “GGGI is committed to helping member states transition to sustainable development and adapt to climate change. We need much greater capacity, and that’s why we need more member states and particularly those countries from the OECD.”

Ban said he has communicated with some heads of state and government who are not yet members, mentioning Canada, France, New Zealand, Sweden and Switzerland.

GGGI appointed Ban to be president of its assembly and chair of its council on Feb. 20. The organization’s assembly is a biennial meeting of 28 member states, and the council is an executive body that consists of 17 member states.

Ban will hold the position for two years through February 2020. His term can be extended with a re-election.

The 73-year-old career diplomat said his new job at the organization is much “in line with” what he “used to do for 10 years” at the UN.

“My vision is to contribute to strengthening GGGI’s support to its member countries to help them achieve their NDC [nationally determined contribution] and SDG [sustainable development goal] targets,” he said, referring to two UN benchmarks that measure how much countries are doing to fight climate change.

He condemned U.S. President Donald Trump for withdrawing from the climate change agreement signed by 197 countries in Paris. Of those nations, 169 have submitted their NDC, the amount by which they hope to reduce greenhouse gas emissions.

“I have been voicing my concerns many times on various occasions, particularly when he announced that he would withdraw from the Paris Agreement,” Ban said. “My message has been quite clear that this is politically short-sighted and economically irresponsible as a leader of the richest, most powerful and most responsible country in the world.”

The money has gone toward agricultural projects in Ethiopia, solar energy installations in Indonesia and green housing in Rwanda, according to Frank Rijsberman, director general of GGGI.