Milwaukee Brewers’ Choi Ji-man has ended his spring training with a .409 batting average, after picking up a single in his last exhibition game. 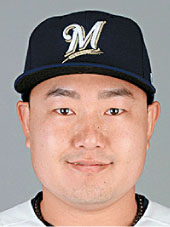 The 26-year-old first baseman/outfielder went 1-for-2 off the bench against the Houston Astros at Minute Maid Park in Houston on Tuesday. He went 18-for-44 in spring training, with three homers, 10 runs batted in (RBIs) and a robust on-base plus slugging percentage (OPS) of 1.245.

This was Choi’s third camp in three seasons. After spending years in the minor leagues in the Seattle Mariners system, Choi made his major league debut with the Los Angeles Angels in 2016. He played in six games for the New York Yankees last year and signed as a free agent with the Brewers in January this year.

Choi has been trying to win a backup first base job behind Eric Thames, a former MVP in the Korea Baseball Organization (KBO) who belted 31 homers in 2017.

But Choi actually enjoyed a far better spring, as Thames ended up with a .170 batting average with two homers in 53 at-bats.

Last year, Jesus Aguilar shared first base duties with Thames and made 52 starts. Aguilar appeared to be the only competition for Choi, until the Brewers acquired outfielders Christian Yelich and Lorenzo Cain during the offseason and started giving Braun, the 2011 National League MVP as left fielder, some reps at first base.

Braun batted .313 with two homers and eight RBIs and had a .983 OPS. He is really not in any danger of losing a place on the 25-man roster.

Against the Astros, Choi replaced Braun in left field to begin the bottom of the fourth and also took Braun’s spot in the batting order as the No. 3 hitter.

Choi led off the seventh inning with an infield single against Cionel Perez but flied out against Rogelio Armenteros in the ninth inning.

The Brewers will open their season on the road against the San Diego Padres at Petco Park on Thursday.

One other Korean hitter in spring training, Choo Shin-soo of the Texas Rangers, ended his spring training with a .304/.418/.522 slash line, after the Rangers’ game against the Cincinnati Reds at Globe Life Park in Arlington, Texas, got rained out Tuesday.

Choo also had two homers and nine RBIs, while scoring nine runs. He hadn’t hit .300 in spring training since 2013 with the Reds, when he batted .340.

The 35-year-old veteran is entering the fifth season of his seven-year, $130 million contract.

The Rangers will stay at home for the season opener against the Astros on Thursday.