The Korea Expressway Corporation Hi-Pass defeated the Industrial Bank of Korea Altos 3-1 in the last game of the V-League championship series at the Hwaseong Indoor Arena in Gyeonggi on Tuesday. 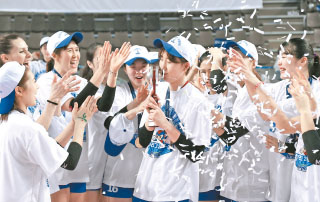 The Korea Expressway Corporation Hi-Pass celebrates its championship victory after defeating the Industrial Bank of Korea Altos 3-1 at the Hwaseong Indoor Arena in Gyeonggi on Tuesday. [YONHAP]

The Hi-Pass won three straight games in their championship series against the Altos to take their first-ever title. Since the Hi-Pass joined the V-League in 2005, the club has had three runner-up finishes but never won a championship. The Hi-Pass also came in first place in this year’s regular season.

Park Jeong-ah of the Hi-Pass won the championship series’ MVP award. Over the three championship matches, Park scored 70 points against the Altos, her former team.

When the game came to an end, the Hi-Pass players gathered in a circle and celebrated with tears in their eyes. Yim Myung-ok was the most emotional of all the players, as she lost her mother to a brain tumor two days before the first championship game.

Yim’s teammates and team manager Kim Jong-min wore ribbons on their chest to remember Yim’s mother during their championship matches. Yim played even harder than normal during the championship and at one point threw her whole body on the court to save the ball.

Bae Yoo-na and Ivana Nesovic, despite their injuries, also contributed the Hi-Pass’ success. Bae, who injured her knee in the beginning of the season while playing for the Korean national volleyball team, relied on painkillers to continue her season.

Ivana’s shoulder was completely taped up as she took many hits as the team’s main attacker.

Center Jung Dae-young also left an impression on her fans and teammates. During the third match of the series, Jung had five blocks and scored 19 points. Jung went on maternity leave in 2010 and returned to the V-League.

“I made the players train intensely, and our goal was to win,” Kim said. “But instead of complaining, the players sacrificed themselves for the team. I’m very thankful that they trusted each other and worked together.”