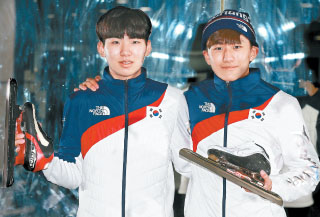 Chung Jae-won, left, and his brother Chung Jae-woong hold their skates after an interview with the JoongAng Ilbo last Wednesday at the Korea National Sport University’s ice rink in southeastern Seoul. [LIM HYUN-DONG]

The duo’s popularity grew after Chung Jae-won took silver alongside Kim Min-seok and Lee Seung-hoon at the men’s team pursuit during the PyeongChang Olympics last month. Chung Jae-woong placed 14th in the 1,000 meters at the Games.

Chung Jae-won stole the show during the team pursuit, setting the pace for Lee for most of the race and then falling back to allow the veteran skater to take the gold. Though Chung finished eighth the sportsmanship he displayed was well received by the home crowd, who recognized the role he played in helping Lee win.

The brothers continued their rise at the junior championships in Salt Lake City on March 11.

Chung Jae-won also won his first gold in an individual race at the World Cup in the 5,000 meters, clocking 6 minutes and 20.75 seconds.

The brothers credited the PyeongChang Olympics for their recent development in an interview with the JoongAng Ilbo last week at the Korea National Sport University’s ice rink in southeastern Seoul.

“At the Olympics, my record got better by a second,” Chung Jae-woong said. “I think trying to mimic what the world’s most famous skaters do when racing with them helped me improve my skills.

Despite only skating for the national team since last November, the pair both earned the right to compete in the PyeongChang Olympics last month.

“Before my only goal was to compete at the Olympics, but now that I’ve done that, my goal is to medal at the Games,” Chung Jae-woong said.

Chung Jae-woong, 18, and Chung Jae-won, 16, started skating when they were children. At age seven Chung Jae-woong took up skating, and just a year later his younger brother, then just six-years-old, started following him to practice.

The brothers aspired to become professional speed skating athletes on the national team after watching the 2010 Vancouver Olympics.

“At first, it was a hobby for both of us,” Chung Jae-won said. “There are no athletes in our family, including our parents. My mom can’t even ride a bike.”

“I was shaking so much out of nervousness when I saw [Mo] Tae-bum for the first time after joining the national team,” recalled Chung Jae-woong.

Chung Jae-won’s sporting hero has always been Lee, who he helped win gold at the PyeongChang Olympics. Lee won gold in the men’s 10,000 meters in Vancouver.

“I was roommates with Seung-hoon on the national team,” said Chung Jae-won. “While rooming with him, I learned a great deal about how to take care of myself. He really helped me improve. He even bought me a bike for my hard work at the Olympics.”

Despite their joint love of skating, the brothers decided to specialize in different areas. Chung Jae-woong is a short-distance skater, while Chung Jae-won excels in long-distance races.

The brothers say they made the decision due to their heart rates.

“Interestingly, my brother’s heart pulses faster than mine,” Chung Jae-won said. “If you have a slower heart rate, you have better endurance.”

“I’m glad I didn’t race long distance with my brother,” Chung Jae-woong said. “If I raced over long distances, I would have fallen behind Jae-won and wouldn’t have made it onto the national team.”

Though the two compete in the same sport, they still cheer each other on.

“When my older brother was competing at the World Cup,” admitted Chung Jae-won, “I kept refreshing the International Skating Union homepage to see his new records.”

These displays of brotherly love haven’t gone unnoticed by fans. Before the Olympics, the duo had about 100 to 500 followers each on social media. That number has jumped well over 10,000 now that the Games has come to an end.