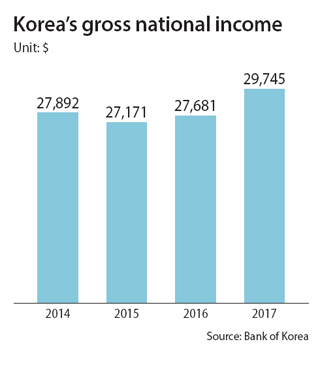 Korea’s central bank projected Wednesday that gross national income per capita would surpass $30,000 at some point this year, helped by robust growth in 2017.

The $30,000 mark has long been regarded by Korean officials as the threshold to enter the ranks of truly developed economies. The fanfare around the figure, though, disguises the actual welfare of many individuals who feel left out of the country’s rapid economic development.

The Bank of Korea said GNI per capita stood at $29,745 in 2017 based on its preliminary estimate, up 7.5 percent from 2016, the highest increase in six years. A central bank official said reaching the $30,000 mark this year was a “sure thing” if Korea keeps its current pace of economic growth and inflation.

“GNI is largely determined by nominal gross domestic product and currency exchange rates,” said Chung Kyu-il, director general of the bank’s economic statistics department. Given these factors, “Korea is sure to see GNI exceeding $30,000 this year,”

The GNI is considered a useful economic metric because it includes all income made by residents of a country regardless of whether it was earned inside the country or overseas. Reaching the $30,000 mark is an indicator of a developed country “because it allows more room to take care of sectors like social welfare,” Chung said.

Should the Bank of Korea’s prediction prove accurate, it will have taken Korea 12 years to get to that level.

Presidential candidates have historically made GNI targets part of their campaign pledge since they are a measurable benchmark. But despite the country inching closer to the target, many in the public seem reluctant to celebrate just yet.

The latest Bank of Korea report shows that the share of employees’ income in gross national disposable income decreased by 0.3 percent last year to 63 percent. The change suggests people are making less money that they can freely spend or save.

The jobs report paints a grim picture of the labor market, especially for youth. Unemployment among people aged 15 to 29 hit an all-time high of 9.9 percent.