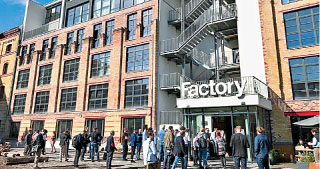 Factory Berlin, a start-up hub created by renovating an old factory, is one of the models that the Korean government is using for its latest urban renewal project. [MINISTRY OF LAND, INFRASTRUCTURE AND TRANSPORT]

The Moon Jae-in administration introduced its planned urban renewal scheme Tuesday, but concerns are mounting that the project may go the same way as similar schemes touted by the previous two administrations.

The Ministry of Land, Infrastructure and Transport on Tuesday announced the road map for an urban renewal project that it calls the “New Deal.” The scheme is meant to redevelop infrastructure in areas that are socially, economically and culturally in decline.

“More and more areas across Korea are experiencing a steady decline in population,” said the ministry in the report released Tuesday. “Especially, some small cities, because of population decline and aging, may be in danger of disappearing.”

According to recent research by the Korea Research Institute for Human Settlements, as many as 1,383 towns across Korea may disappear in the next 30 years. The ministry explained that the project, which was also a pledge made by President Moon Jae-in during his campaign, is intended to combat the decline of cities and towns. A total of 50 trillion won ($46.5 billion) will be spent by the government over the next five years.

One of the key elements of the project is to create hubs for local start-ups.

Infrastructure that can provide public services and housing for young people as well as incubating space for start-ups will be built in some 100 areas, according to the government. In particular, the government is looking to turn state-owned land or buildings and dilapidated government offices into incubating centers for local start-ups.

Cultural complexes will also be built in 50 different areas. The government also plans to utilize the historical or cultural resources of selected areas to create commercial districts. It expects the plan to be able to create jobs in less-developed parts of the cities and living spaces with favorable conditions. The final 250 areas that will be included in the project will be selected some time in August or September.

The government provided a number of examples from other countries as models for the “New Deal” project, including 22@Barcelona in Spain and the Amazon Campus in Seattle, Washington.

The 22@Barcelona project started in the early 2000’s with the aim of turning Poblenou, an industrial area in the southeastern part of the Spanish city, into a technological and innovation hub. According to the data provided by the Transport Ministry, a total of 925 different companies settled into Poblenou and over 30,000 new jobs were created because of the regeneration project. The redevelopment project also bolstered the local housing market.

U.S. information technology giant Amazon turned South Lake Union, a run-down neighborhood in central Seattle, into a business district. The company utilized the infrastructure already in place and redeveloped buildings to build Amazon Campus. Because of the ecosystem created by Amazon’s presence, there are also a number of leading IT companies, including Google, Facebook, Apple and Alibaba, with offices and research centers in the district.

While the Moon administration is pushing for urban renewal, there are mounting concerns that the regeneration will fail.

“In an urban renewal project, it’s important to pick and focus [in one specific region] and create a successful model,” explained Choi Mack-joong, a professor of urban planning at Seoul National University.