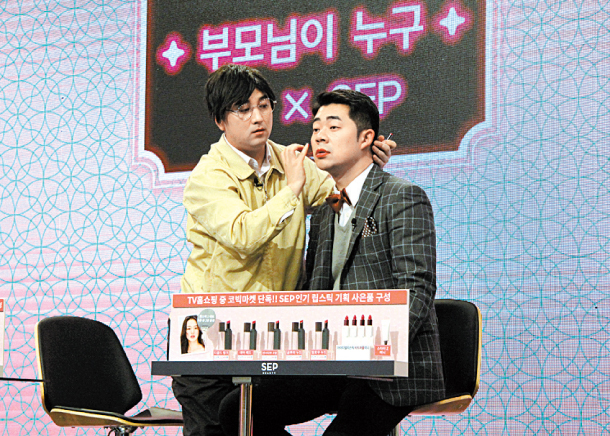 CJ O Shopping and CJ E&M’s first collaboration turned out to be a roaring success, getting young people to do something unusual - buy items off a home shopping network.

Comedians from the TV show performed on stage in costumes using four products on sale that day, including a Philips razor and LG Electronics’ A9 cordless vacuum cleaner.

Each item had its own team of comedians who promoted that product during their act.

According to CJ O Shopping on Wednesday, the viewership for CoBig Market was four times higher than the usual for home shopping programs in the same time slot.

Three out of four products introduced during the show were sold out, and total sales were over 1 billion won ($930,000).

The share of orders from customers in their 20s and 30s was twice that of normal home shopping programs.

The show was a hint as to how the country’s largest home shopping channel and its affiliated entertainment giant will join forces.

CoBig Market was CJ O Shopping and CJ E&M’s first experiment in combining sales and entertainment since their merger announcement in January.

While the merger of a home shopping leader and entertainment giant seemed unusual at the time, it helped ease concerns from both companies.

CJ E&M was looking for a way to generate extra earnings using its prominent shows and TV channels.

Analysts generally welcomed the decision, anticipating that the merger would be successful in the long run.

However, some market watchers thought that there were few clues as to how big the positive effect of the merger would turn out to be.

All home shopping networks are struggling to add different types of content to their shows. In the past, channels that sold quality products at reasonable prices generally succeeded. Now, the competition is all about presenting products in interesting ways to counter the industry’s sluggish growth.

Lotte Home Shopping, for example, enlisted the popular boy band iKON to sell marinated beef on its channel this evening.

Hyundai Home Shopping on Wednesday launched a service on its channel that allows users to see how different types of clothes look on 3D models.