GM asks for huge tax breaks to stay in Korea

GM asks for huge tax breaks to stay in Korea 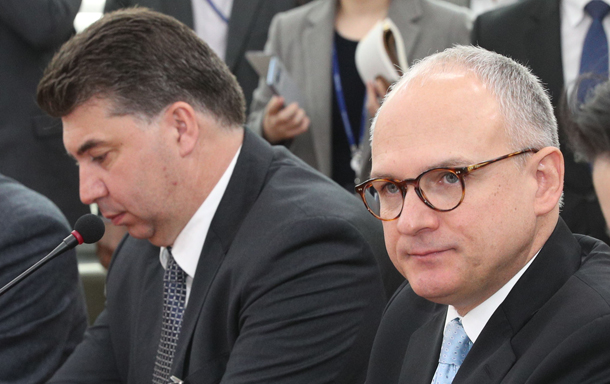 General Motors requested massive tax breaks from the government on Tuesday in hopes of saving its ailing Korean subsidiary.

Earlier on the same day, GM Executive Vice President Barry Engle gave GM Korea union workers a deadline of April 20 to agree on a deal that will cut their benefits.

If they can’t reach a deal, he said that GM Korea will have no choice but to file for bankruptcy.

Engle asked the Korean government to designate the area around one of GM Korea’s plants as a special foreign investment region.

While GM didn’t mention which plant, the most likely option is the company’s largest plant in Bupyeong District, Incheon, also home to GM Korea’s headquarters and design center.

Korea first introduced the special foreign investment designation in 1998 during the Asian financial crisis. The law allows foreign companies to receive full exemptions on income and corporate taxes on their ventures in a specific region for five years. After that period, the company receives a 50 percent discount on their income and corporate taxes in addition to other tax breaks. The government lowered the bar on eligible investments in 2002 from $50 million to $30 million. Currently, there are around 80 foreign companies that receive the special foreign investor tax breaks.

The Korean government is treating GM’s request for the huge tax break with hesitance, as the investment plans the company is offering are not considered new investments under the law.

Government officials from the Ministry of Trade, Industry and Energy as well as the Ministry of Strategy and Finance and the Financial Services Commission told GM that the government is reviewing whether the company’s investment plan meets the required conditions for a foreign investment region.

Korea Development Bank president Lee Dong-gull on Wednesday claimed that GM has not provided the information required to determine the Korean government’s stance on whether to give the company the tax breaks.

“They have only provided 85 percent of the information, as a formality, and left out key data,” Lee said. “We have told Vice President Engle this, and he has agreed to provide the information.”

GM, in response, stressed the need to reach an agreement with the labor union on its cost-cutting efforts. The company said these measures would allow GM Korea plants to start manufacturing two new car models.

If the labor union does not reach an agreement by April 20, Engle said it will be impossible for GM to come up with a plan to cut costs.

That scenario would also jeopardize GM’s support from the Korean government and the Korea Development Bank, GM Korea’s second-largest stakeholder.

Engle stressed that GM Korea needs to secure roughly $600 million by the end of next month to make payments to employees who are voluntarily retiring and to contractors.

The company faces 700 billion won ($651 million) of debt that matures at the end of this month and an additional 988 billion won that will mature between April 1 and April 8.

Most of the debt was borrowed from GM headquarters and its affiliates.