KDB warns that Kumho Tire has only few days left

KDB warns that Kumho Tire has only few days left 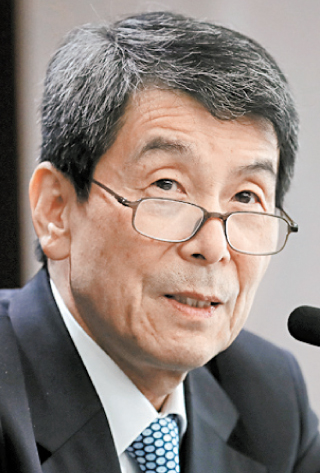 Kumho Tire will have no other choice but to go into liquidation if it doesn’t accept a Chinese offer to buy it, warned state-owned Korea Development Bank President Lee Dong-gull, Kumho’s main creditor.

A day after a local tire retailer expressed interest in buying the troubled manufacturer, Lee again pressured Kumho Tire’s union to agree to the offer by China’s Doublestar before Friday.

“By Monday next week, several billion won in promissory notes will be in default, and once that moment arrives, the process of liquidation starts,” the KDB president told reporters on Wednesday, adding that the company will be delisted from the stock market.

“Not even the Blue House can prevent the promissory notes from defaulting,” Lee said. “Starting Monday [if an agreement is not reached by the end of this week] a legal process will take place regardless of anyone’s decision.”

He said this was not a threat to the unionized workers disagreeing with the deal but a simple reality.

“Even if we want to postpone the deadline, we can’t,” Lee said. “I don’t even want to imagine Doublestar withdrawing their investment promise.”

He said the KDB is considering adopting a scheme that would guarantee profits generated from the turnaround of the company be shared with its workers - if the Doublestar takeover goes through.

Lee has made other suggestions such as stock options for workers to get the union to agree to the sale to Doublestar.

“We’re looking into many measures that would convince the unionized workers and employees [of Kumho Tire] of management transparency,” Lee said.

“[Tire Bank’s] ability to raise the investment [needed to buy Kumho Tire’s shares] is doubtful and [if even Tire Bank succeeds in buying the company] it would be impossible [for Tire Bank] to turn around [Kumho Tire’s] plants in China,” Lee said.

Kim Jeong-gyu, president of Tire Bank, announced Tuesday he was interested in taking over the company out of patriotism. But there were questions as to whether a company with revenues of 372.9 billion won ($348 million) in 2016 and operating profit of 66.4 billion won could find 646 billion won to buy a 45 percent stake in Kumho Tire.

Lee pleaded again with Kumho Tire’s workers to make a decision in the best interest of the economy.

“We have approached the issue with the attitude of protecting the livelihoods of 5,000 employees as best as we can,” Lee said. “We have reached the conclusion that selling it to Doublestar is the only way to keep Kumho Tire [alive].”

The price of the tire company’s stock on Wednesday plummeted 15.98 percent to 4,050 won.