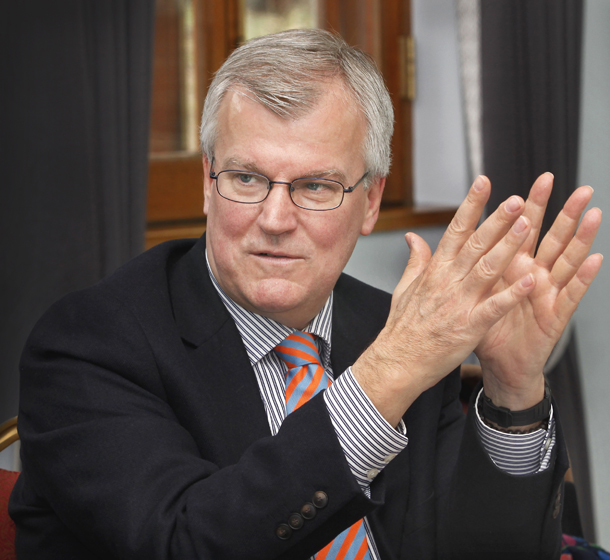 The United Kingdom’s prospective exit from the European Union will upend the country’s free trade commitments and require Britain to negotiate new deals with other countries. Korea will be a top priority, said Simon Smith, the new British ambassador to Seoul.

“We have in our foreign office in London a great situation room which focuses on the action to look beyond Brexit and look at how many agreements we will want…to replicate or continue with our important partners,” Smith said during a news conference at the embassy in central Seoul on March 21. “It’s marked out which agreements we need to work on, looking ahead post-Brexit, which agreements we need to continue in order to sustain successful relationships and I can certainly tell you that the Republic of Korea [the official name of South Korea] stands in a very high position on that board.”

The ongoing discussion between the United Kingdom and Korea may allow the two countries to forge a trade agreement by the time Britain completes its exit from the European Union in December 2020.

“We have had very constructive and very encouraging discussions with our partners in the Korean government on what the shape our trading relationship and economic relationship will be after Brexit,” he said. “From now on, we will be able to talk progressively in more detail and with more clarity about the sort of relationship and agreement we expect to see in place after December 2020.”

The British ambassador, who began his tenure this month and whose personal ties with the country date back some 15 years, is proficient in Korean. In a wide-ranging news conference at his office, he discussed his goals for his time in Korea, including improving his fluency in the language. The following are excerpts from the news conference.

Q. What are your main objectives starting your tenure in Seoul as the British ambassador?

A. As I start my job here, I have three basic objectives. One is in the field of business and economy. Britain is a country which needs its international economic relationships, its ability to export and invest overseas; it needs that as a vital component of its economic health. And so even after — especially after — Britain leaves the European Union, we will need to put particular effort into building further on our international economic links and our international trade and investment relationships.

Second, I see a very important focus of my work in the field of security and defense relationships. As a permanent member of the UN Security Council, we in Britain are very conscious…that we have to play a constructive part in major problems of global and regional security. And our role in the Republic of Korea is many-faceted. But we will concentrate on first of all doing what we can to help search for a better solution to problems with North Korea, including our support for complete and verifiable implementation of the denuclearization of North Korea.

My third priority is to do with people. Because in the end, I think the business of diplomacy, the business of building international relations is fundamentally about building relationships between people…We’ve just come to the end of a year of U.K.-Korea Creative Futures, which is a big cultural festival, which I think again made a big contribution to increasing knowledge about the U.K. amongst many people in Korea. And over the next few months, we will see the mirror image of this, a great festival of Korean culture unrolling in the United Kingdom.

You were previously the British governor on the board of the International Atomic Energy Agency in Vienna. How do you read the latest inter-Korean dialogue?

We see this as a real genuine opportunity. We are extremely admiring of the efforts that administrations of the Republic of Korea have made, first of all, to take the opportunity that was presented by the holding of the Olympic and Paralympic Games here and to build on this which sets up these summit meetings. We also believe that this is in very large part a result of the successful efforts that all of us have made to keep pressure on North Korea.

As we look ahead, if those processes [the summit meetings] manage to make progress in setting out a path to denuclearization, I think that Britain, with its experience in the field of both nuclear power generation and nonproliferation and in the field of the management of all aspects of nuclear security…will be able to bring to the process [its experience and support].

Going back to the Korea-U.K. FTA, what are some details in the agreement being discussed?

While we remain a member of the European Union until March 2019, there are limits on the details into which we can go, and there are limits on what we can do in terms of actual negotiations of agreements. I think that at the very least, it makes sense for us to start out with the objective of having in place a trade relationship and a trade agreement between the United Kingdom and the Republic of Korea that, at the very least, leaves us in no worse a position…and enables us to trade on as good a basis as we have had under the EU-Republic of Korea free trade agreement.

The [Brexit] agreement that was made in the last couple of days makes the whole process, in my view, quite considerably easier. One of the things that was a little bit of a handicap or two was that it wasn’t quite certain exactly over what time scale things would happen.

In fixing this implementation period and making clear that during this implementation period, Britain will in effect enjoy the same sort of trading conditions — the same sort of business and economic relationship with the European Union, and in effect be in the same position as European Union countries in its relations with countries outside the EU — I think what that does is set a very tidy time framework between March 2019 and December 2020. We and our important international partners have that period in which to nail down the full details of the agreement that we want to emerge with after 2020.

But the time between now and March 2019 will also be important. There has been a very regular rhythm of meetings between the United Kingdom and Republic of Korea government representatives. They have talked about a lot of the substance of the agreement that we want to emerge with once Britain is no longer party to the EU-Korea free trade agreement, and I’m sure those discussions will continue.

What are some of your personal goals during your ambassadorship?

One thing I should very much like to do is vastly improve my knowledge and ability in the Korean language. In particular I would like to do what I have done in all countries that I have worked in so far, which is to be able to get to know and to be able to understand the literature of that country in the language in which it was written.

When I was in Korea last year, I had a very great opportunity to have a one-hour personal lecture by a professor of Korean literature at Kyungpook National University in Daegu, and I received from this professor a long recommended reading list of Korean literature of the 20th century. One of my objectives is to improve my Korean language ability to the point where I can work through this list and go back and tell the professor, “I have taken your advice.”