Chung Hyeon failed to advance to the semifinals of the Miami Open after losing in straight sets to 17th ranked John Isner of the United States in Florida on Wednesday. 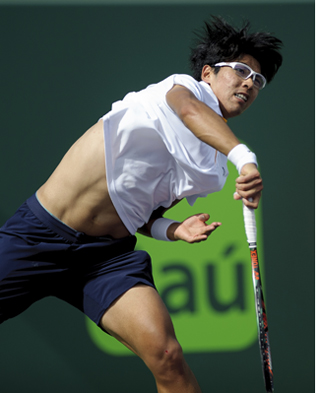 Chung Hyeon serves against John Isner at the Miami Open at Crandon Park Tennis Center in Florida on Wednesday. [AP/YONHAP]

Though Chung previously beat Isner at the ASB Classics in Auckland back in January, this time, Isner was dominant; serving 13 aces to Chung’s three to win the game 1-6, 4-6. Chung, who is normally good at returns, failed to keep up with Isner’s strong serves. The match concluded in just over an hour - surprisingly quick work for a tennis star famous for playing the longest match in history.

Chung slipped up at the start, with Isner breaking his serve early on to quickly dominate the set. Chung fought back in the second set bringing the score 2-2, but Isner quickly capitalized on two double faults to pull in front.

With the loss, Isner has pulled ahead in the two’s all-time head-to-head record with two wins, one loss.

Chung gained wide popularity when he caught the tennis world by his surprise feat at the Australian Open, where he defeated Novak Djokovic of Serbia 3-0 in the round of 16 and went on to beat Tennys Sandgren of the United States in the quarterfinal before falling to world No. 1 Roger Federer of Switzerland.

The Korean star started playing tennis at the age of 6 to improve his eyesight. His mother reportedly took him to the hospital because he was always frowning and found that he had astigmatism. An optician recommended that Chung focus on the color green; his family felt tennis was the best option.

After a few seasons quietly working his way up the world ranking, Chung has exploded onto the international tennis scene this season, reaching the quarterfinals in six consecutive tournaments, starting with the ASB Classic in New Zealand in January.

Chung most recently lost to Federer in the quarterfinals of the BNP Paribas Open at Indian Wells in California on March 14.