Promy’s veteran hopes to retire with another championship

Promy’s veteran hopes to retire with another championship

Kim Joo-sung, the best player in the history of the Wonju Dongbu Promy, is finally ready to retire after 16 years with the team. But before he steps off the court forever, Kim wants to lead the Promy to another championship. 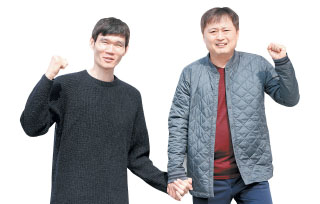 Kim led the Promy to the top record in the Korea Basketball League (KBL) regular season for its first time in six seasons. He is hoping to make his last postseason his best ever by winning another championship title after playing 16 seasons in the KBL with the Promy.

The Promy started the playoffs with a 100-93 win against Anyang KGC on Wednesday, taking the lead in the five-game series.

Doo Kyung-min, the regular season MVP among the KBL’s Korean players, led the Promy along with Deonte Burton, the foreign MVP. The two players scored a total 55 points, and Doo scored 29 while Burton scored 26 points with 12 rebounds.

“There would be nothing more honorable than retiring with a championship ring,” Kim said during a recent interview with the JoongAng Ilbo, an affiliate of the Korea JoongAng Daily.

The Promy’s success has been the biggest upset in the KBL this year, as they were rated the worst team in the league before the start of the regular season. Despite losing most of the team’s starting players from last season, the team’s new head coach Lee Sang-bum successfully led the Promy to the regular season title.

When Wonju took the top spot in the KBL midway through the season, many expected it to be a fluke, but the team kept up their strong performance.

“I could see that the teams that looked down on us were getting careless against us,” Kim said. “So I told the younger players that ‘even if we lose, let’s be an uncomfortable team.’”

Ever since his debut, Kim has been one of the league’s best players. Standing tall at six feet nine inches, Kim has great speed and shooting ability, making him a tough target for opponents to block. In 2002, the year Kim made his KBL debut, he led the Promy to a championship and won the rookie of the year award. Throughout his 16 seasons with the Promy, the team took the top place in the regular season five times and won three championships.

In the KBL, Kim is ranked first in career blocked shots and number of games played and second in career scoring.

Despite his successful career, Kim was never Wonju’s main scorer or the star of the team. He always played a supporting role. Even in his last season, he didn’t grab the spotlight. During this season, his playing time went down substantially compared to the 2016-2017 season, when he played 22 minutes per game. In the beginning of this season, Kim averaged 13 minutes a game but towards the end, his playing time per game was only an average of 10 minutes. Kim mostly appeared in the fourth quarter and served as the team’s “problem solver.”

By finishing the regular season with a scoring average of 5.26 points and 2.07 rebounds per game, Kim received the sixth-man award for an outstanding substitute player during the KBL awards ceremony on March 14.

Prior to the start of the season, Lee asked Kim to coach the team’s two young players, Kim Tae-hong and Seo Min-su, for two to three hours a day to prepare them to take over the “big man” position.

“During the rebuilding process, older players can get excluded, but coach trusted me and used me,” Kim said.

Once team training sessions were done, Kim started coaching the younger players. After Kim’s lessons, Kim Tae-hong and Seo, who each had less than five minutes of playing time per game at the start of the season, developed into starting players who now play about 20 minutes a game for the Promy.

“The training I had at night with the younger players was memorable,” Kim said. “When I see [Kim] Tae-hong make a successful drive in or [Seo] Min-soo make a hook shot, I feel like I can retire now.”

Though the Promy won the regular season, their finish was disappointing, as they lost five games during the last round of the season.

“Up until [the sixth round], the players were passionate, but [during the sixth round], I could see them thinking about their bodies,” Kim said. “[I told them], it’s too much for us to think. If we do this, we can’t be the winning team.”

The Promy will play their second game in the five-game semifinal series against Anyang KGC tonight at Wonju Gymnasium in Gangwon at 7 p.m.