Is Korea a scapegoat?

Is Korea a scapegoat? 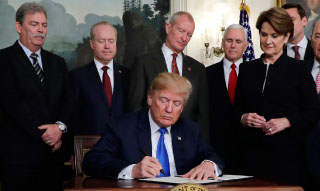 A trade war is defined by force. One gets tough against a weaker party and backs off when the opponent is deemed strong. China plays the typical tough guy. When Seoul took a safeguard action towards $10 million worth Chinese garlic in 2000, Beijing struck back with much heavier force. It announced a ban on $670 million in annual imports of South Korean cellular phones and polyethylene. Seoul inevitably had to give in to Beijing, which outright ignored regulations and procedures and refused negotiations.

China was not that reckless with the United States. When the Barack Obama administration invoked a safeguard against $1.7 billion worth of Chinese tires in 2009, the Chinese government responded in compliance with U.S. laws and procedures. China’s rubber industry called for retaliatory tariffs on U.S. agricultural and automobile imports, but was ignored by its government.

Beijing has traumatic experiences with U.S. trade protectionism. It can go back as far as the times of the New Deal program led by President Franklin D. Roosevelt. Along with the massive fiscal stimuli, Roosevelt, for a moment, scrapped the Gold Standard monetary system, which he believed was stalling recovery during the Great Depression. As a result, silver prices shot up, and the sharp spike in Chinese silver was tantamount to today’s appreciation in the Chinese yuan’s value. The inflated prices reduced Chinese commodity exports in 1934 by a third against three years before. Farming output shrank as much as 47 percent. The Chinese economy became more or less wrecked.

Deng Xiaoping, who led the opening and reform of the socialist Chinese market, put foreign policy second after economic development under the famous slogan “Hide your capacities, and bide your time, and accomplish things where possible.” China’s mainstream economists persistently fretted over the U.S. dollar. While biding time, China kept its power secret and gobbled up dollar assets until it sat on the world’s largest foreign exchange reserves.

Above all, China reduced its external reliance and expanded the domestic economy to fuel growth. The share of exports in gross domestic product tapered off to 19 percent last year from 35 percent in 2007. A British research institute estimated that the U.S. tariff bombardment would pare down China’s growth by just 0.1 percent this year.

Backed by its economic prowess, China — under Xi Jinping, who now has an indefinite term — became more assertive than ever. Xi made it clear that China will never “swallow the bitter fruit” of damage to its national interests. When the Donald Trump administration imposed tariffs on $50 billion in imports from China, Xi’s immediately struck back — starting with punitive tariffs on $3 billion worth of U.S. products. He hinted at the possibility of limiting American bean imports and selling dollar assets.

His show of muscle worked on Washington. Instead of hawkish commerce secretary Wilbur Ross, Trump ordered relatively moderate Treasury Secretary Steven Mnuchin to lead negotiations with Beijing. It is still too early to predict the outcome. A trade war has more of a political motive than an economic one. Trump must deliver achievements before the midterm election in November and Xi needs to cement his mighty power. A bumpy road is ahead. The two sides could reach a dramatic agreement or a head-on clash.

The problem is that their war could lead to collateral damage for Korea Inc. China is reportedly offering to cut back semiconductor imports from Korea to purchase more U.S. chips. We cannot allow ourselves to be their punching bag. We must flex some muscle, too. We need to restructure the economy to lessen our external reliance and expand domestic demand. Korea’s share of domestic demand against its gross domestic product (GDP) is the lowest among members of the Organization for Economic Cooperation and Development. Its share of exports to GDP increased to 43 percent last year.

Regulations must be lifted to raise productivity and enable companies to spend at home to bolster domestic demand. But the government is so pro-labor it’s nearly forcing companies to take their businesses abroad. We will never be a match for America and China if we weaken our potential at home this way.