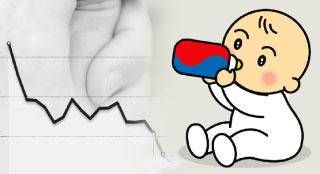 A Korean expat in the United States told me that even though she pledged not to have more children in Seoul, she is now pregnant with her second child in the United States. Three other families in the neighborhood are also having children. I thought of the neighbors in the television drama Reply 1988. That year, the total fertility rate was 1.6.

Why did this family change their mind? First of all, the husband was coming home early, as company outings are rare and there are not many bars in the area. As the father stays home longer, he is more involved in the household. According to an OECD survey, the average American men spends 2 hours and 30 minutes doing housework a day, far longer than Korean men’s 45 minutes. Thanks to the physical distance, the couple isn’t forced to fulfill the expected roles of a daughter and son-in-law. Thanks to company housing, the family has one less thing to worry about. Educational expenses are minimal.

There is a version of this utopia in Korea. The city of Sejong has had the top birth rate for three consecutive years. Last year’s fertility rate was 1.67, close to the OECD average. Stable jobs of civil servants, relatively affordable housing prices and close proximity between workplace and home contributes to the quality of life. Once I had a dinner meeting in Sejong, and a civil servant went home to give dinner to his children and returned 30 minutes later. I thought it was a great place to raise children.

Young people would choose to have children in this kind of environment. But it is nearly impossible to create and takes time. The government’s budget and policies are limited in bringing changes. When the government announced this year’s budget, a large sum was allocated to boosting the fertility rate. But large budgets have failed to increase the fertility rate — last year’s was the lowest in history.

Austrian demographer Wolfgang Lutz argues that when the fertility rate falls below 1.5 and stays there, it is hard to bounce back. The population reduction leads to a decrease in fertile women, and the ideal number of children goes down. When young people feel that expected income in the future is not up to their desired spending, they are likely to have fewer children. This is exactly the situation that Korea is in.

Now, we need a new perspective on human resources. Rather than obsessing over the fertility rate, we should consider policies responding to the decrease in production of population and aging, such as automation, AI and robot technologies, as Japan has done. Government policies so far have focused on having and raising children. But many young people ask why they need to have children. They think better job prospects, less traffic, less pollution and lower housing prices would be nicer.

I also want the fertility rate to go up, but objective indicators say otherwise. Young people who don’t know why they need to have children deserve an answer as much as those who ask for support to have children.