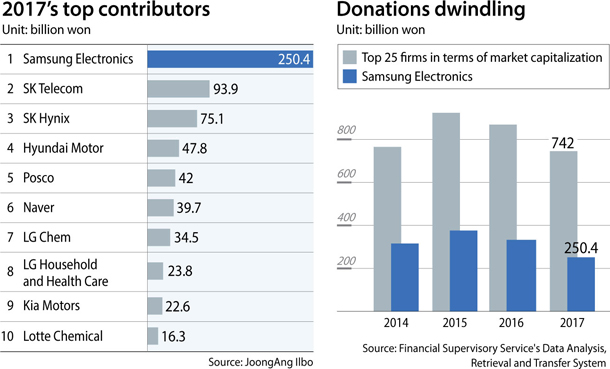 Korea’s biggest companies again reduced their donations to charities and nonprofits last year in the sharpest decline ever recorded.

Last year, Korea’s 25 largest companies donated 742 billion won ($697.5 million), down 14.5 percent from a year earlier, according to regulatory filings from the Financial Supervisory Service. Donations fell more steeply last year than ever before - 2016’s 868.4 billion won was only 6 percent lower than the 924.1 billion won donated in 2015.

Last year’s top donator was Samsung Electronics, but it slashed its contributions by 25.1 percent from 2016, despite the company’s record-high earnings from its soaring semiconductor division.

The most widely held view is that Korean enterprises aren’t donating their funds to avoid corruption allegations, having learned from the scandal, which resulted in the arrest of both Park and Lee.

Park’s shadowy confidante Choi Soon-sil pressured Korea’s big businesses to donate to two foundations that served as fronts for bribery. The passage of Korea’s antigraft law, better known as the Kim Young-ran law, in September 2016 also dealt a blow to donations, according to experts.

“Samsung affiliates’ donations make up a huge portion of the total,” said an official from a business lobbying group. “Samsung’s move to shrink the size of donation has caused a ripple effect.”

The trend is expected to persist, at least for a while.

“Because corporate donations are now viewed by some as illegal, businesses are thinking that it’s better not to do anything,” said Yoon Chang-hyun, a professor of business administration at the University of Seoul. “The feared side effect is that financial support for various non-profit organizations, foundations and academies will shrink.”

The Community Chest of Korea, a non-profit organization that runs a leading donation campaign, said last year it received the lowest amount of donations since 2011.

The nonprofit sets up a large mock thermometer in central Seoul every year to measure donations. Last year, the temperature on the thermometer barely crested 100 degrees, which means that 100 percent of the organization’s fundraising goal was met. Usually, the number is much higher.

Corporate donations accounted for 71.9 percent of the total funds raised in 2016, but they fell to 68.1 percent last year.

An official from Unicef also said that businesses have been donating less to the prominent children’s charity over the past two to three years.

Large companies are getting more fastidious about their contributions. Some of them have changed their rules and regulations to mandate that donations that exceed a certain amount receive approval from the board of directors.

Some businesses are moving away from cash donations to offering practical support to beneficiaries. Samsung Electronics, for example, recently donated 1,000 thermographic cameras to a fire station after firefighters requested they introduce a product that suits their needs. Samsung spent nine months developing the camera, which weighs significantly less and is more portable than other thermographic cameras.

Hyundai Motor has been providing commercial vehicles to low-income businesspeople who find it difficult to buy or borrow cars. They had their monthly incomes double or triple after getting the vehicles, Hyundai said.

“Corporate social responsibility is becoming ever more important,” said Yoo Hwan-ik, head of the Innovative Growth Department at the Korea Economic Research Institute, a private think tank. “But Korean businesses are increasingly refraining from normal social responsibility activities for fear that even their normal contributions may be misunderstood.”