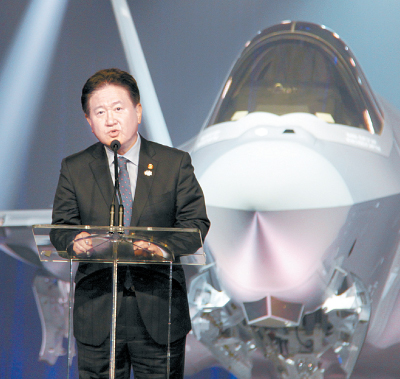 Vice Defense Minister Suh Choo-suk speaks at a joint rollout ceremony for Korea’s first F-35A stealth fighter aircraft at Lockheed Martin’s assembly line in Fort Worth, Texas, on Wednesday. Korea sealed a contract to purchase 40 F-35As in 2014, which will be delivered by 2021. The Korean Air Force’s fifth-generation F-35A Lightning II is seen as a milestone for the combined operations of the ROK-U.S. Air Forces. [YONHAP]