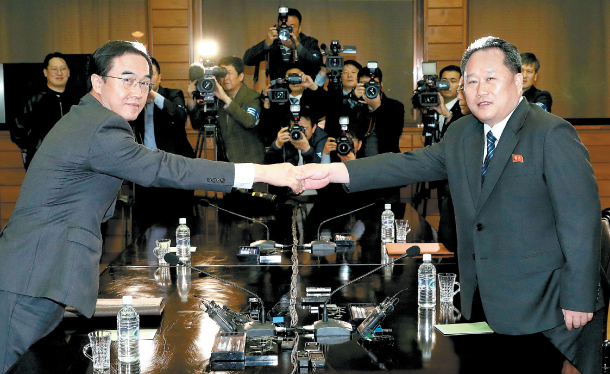 South Korea’s Unification Minister Cho Myoung-gyon, left, who led a three-member delegation to a high-level inter-Korean meeting Thursday at Tongilgak, a North Korean-controlled building in the truce village of Panmunjom, shakes hands with Ri Son-gwon, chairman of the Committee of the Peaceful Reunification of the Country of the Democratic People’s Republic of Korea, a cabinet-level agency in North Korea dealing with relations with the South, who led a three-member delegation from Pyongyang. [YONHAP]

A joint press statement released by South Korea’s Unification Ministry, which handles relations with North Korea, said that a working-level meeting between the two countries discussing protocol, security and press coverage for the summit will be held next Wednesday on South Korea’s side of Panmunjom, which straddles the border.

South Korea’s Unification Minister Cho Myoung-gyon, who led a three-member delegation to the latest high-level talks, said another high-level meeting between the two Koreas could be held next month “if necessary” to further discuss key agenda items for the summit.

Asked by reporters whether the agenda was discussed with North Korea Thursday, Cho said both sides “thoroughly” talked over the matter, but agreed to discuss specific details later. In principle, Pyongyang’s agenda was “not too different” from that of Seoul, Cho continued, and the two leaders will basically talk about denuclearizing and establishing a “peace regime” on the Korean Peninsula, and improving South-North ties.

The inter-Korean summit will be South Korean President Moon Jae-in’s first face-to-face meeting with North Korean leader Kim Jong-un and the third summit of its kind between two Korean leaders after 2000 and 2007.

The North was represented by Ri Son-gwon, chairman of the Committee of the Peaceful Reunification of the Country of the Democratic People’s Republic of Korea, a cabinet-level agency overlooking relations with the South; Jon Jong-su, vice chairman of the same committee; and Kim Myong-il, a director-level official from the committee.

“There’s only a month left before the North-South summit,” Ri said in closing remarks, according to pool reports, “and during this short period, there are many things to discuss at the working-level. But if both sides keep deeply aware of the historic significance and importance of the summit meeting, and work hard with prudence and a cooperative attitude, we will be able to discuss and resolve every issue swiftly and smoothly.”

The high-level inter-Korean dialogue was held a day after Kim Jong-un returned home from a surprise visit to China from Monday to Tuesday on the invitation of Chinese President Xi Jinping, through which both countries agreed to improve recently strained ties. It was the young leader’s first known trip outside North Korea since he took power in December 2011 following his father’s death, and his first meeting with another government leader.

Pundits speculated Xi’s invitation to Kim was a reflection of China’s anxiety that it was bypassed in the recent flurry of diplomatic overtures among Seoul, Pyongyang and Washington, and that it perceived its grip over Northeast Asia affairs waning. For North Korea, the regime could have sought Beijing’s help in easing economic sanctions against the regime, and support from Xi was critical in building its negotiating power with the United States for when Kim meets Trump.

Trump said in a tweet on Wednesday that he received a message from Xi the previous night in which the Chinese president said his meeting with Kim went “very well” and that Kim was looking forward to meeting Trump. Regardless of that, “maximum sanctions and pressure must be maintained at all cost,” Trump wrote.

In another tweet the same day, Trump said that he was looking forward to the meeting with Kim now that there was a “good chance” the North Korean leader would do “what is right for his people and for humanity.”

White House Press Secretary Sarah Huckabee Sanders said the Xi-Kim dialogue was a “good indication that the maximum pressure campaign has been working,” because for the first time since Kim rose to power, he left the country to meet the head of a foreign government.

Sanders continued that the administration thought “things are moving in the right direction,” though it would remain “cautiously optimistic” about the recent developments.