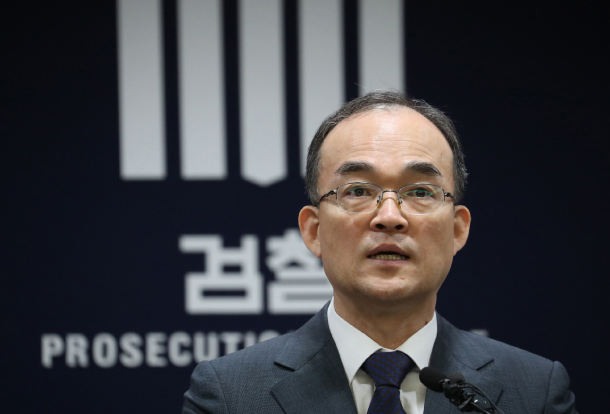 Moon Moo-il, the nation’s top prosecutor, speaks at a news conference in Seoul on Thursday. [YONHAP]

The nation’s top prosecutor insisted on Thursday that his office would not surrender its exclusive right to seek warrants amid efforts by the Moon Jae-in administration to reform the criminal justice system.

Prosecutor General Moon Moo-il, speaking to reporters at the Supreme Prosecutors’ Office, admitted that his agency had been sidestepped in the government’s recent discussions about realigning investigative powers. Moon said his office was willing to change its relationship with the police and minimize its involvement in investigations, but it would not surrender prosecutorial discretion to the police, arguing the prosecution had a role in protecting human rights.

The turf war between the police and prosecution has gone on for nearly 20 years. The most contentious issue is separating and redistributing investigative and prosecutorial powers, as Korean prosecutors have both. The police, who often conduct initial probes, say their roles should be redefined so they are more powerful in investigations and prosecutors come in at the indictment stage.

Reforming the criminal justice system was also one of President Moon’s campaign pledges after a series of corruption and power abuse scandals tainted the image of the prosecutors’ office. In a constitutional reform bill submitted to the National Assembly earlier this week, Moon proposed removing a clause in the Constitution that gives prosecutors the exclusive right to seek a warrant.

In the past month, Moon’s justice minister, Park Sang-ki; his interior and security minister, Kim Boo-kyum; and his top aide for civil affairs, Cho Kuk, reportedly had several meetings to discuss a plan to increase the police’s autonomy in investigations while reducing the oversight role of prosecutors.

“We must think about the appropriateness of having discussions under the table,” Moon said, conveying the prosecution’s bitterness over the process. “I’ve heard that discussions are ongoing, but I don’t know the specifics or the progress.”

Moon also said the Justice Ministry had not replied to his query about whether the government had finalized a reform plan. “I don’t know how far the discussion has progressed, but I believe we will be given the opportunity to present our position,” he said. “I think it is inappropriate to create a plan completely disregarding our positions.”

The prosecution remains open-minded about the discussion, Moon said. He promised to create a more level relationship with police and reduce the prosecution’s role in direct investigations.

Still, Moon said, the prosecution needs to maintain its oversight role in the criminal justice system because the police’s power is concentrated at the top. If the National Police Agency decentralizes its power, investigative powers will be realigned naturally, Moon said, stressing the need to introduce regionally autonomous police.

“By doing so, 98.2 percent of investigations, currently conducted by local police, will be proceeded under the democratic oversight of local residents,” Moon said. “The prosecution’s role, then, will be minimized to deciding whether an indictment is necessary or not after the cases are handed over to us.”

On the warrant issue, Moon said the prosecution’s role was necessary as “a safeguard of human rights that has continued for more than 50 years,” but the office is willing to create a system where police can challenge the prosecution if prosecutors reject their request for a warrant.

Moon said it was important for the prosecution to maintain its right to close an investigation and make its own judgement on whether an indictment is necessary. He called it “unimaginable” for the police to investigate a case and not send it to the prosecution.

The prosecutor general emphasized that his office supports the president’s intention to reform the criminal justice system, particularly his plan to create a new investigative body that focuses on corruption by top civil servants. “The prosecution understands well why the plan was proposed and the strong desire of the people for transparency,” Moon said. “If the National Assembly creates an appropriate plan, we will accept it as it is.”

In the news conference, Moon also apologized to the public for the series of scandals involving members of the prosecution. “In order to prevent recurrence of such problems, we will actively push forward a plan to create a separate investigative body for members of the legal community,” he said.

After the prosecutor general’s news conference, the Blue House said it appreciated his support for some of its reforms but that his proposal to introduce a regional autonomous police system would require further discussion.