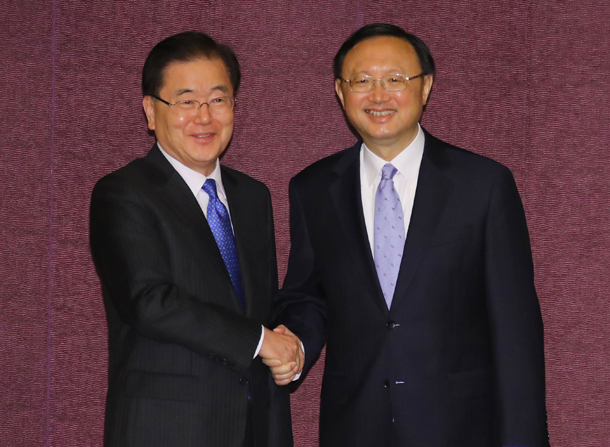 The Blue House on Thursday welcomed the summit meeting between North Korean leader Kim Jong-un and President Xi Jinping of China on Monday, taking particular note of Kim’s remark on the denuclearization of the Korean Peninsula.

“It carries special meaning that North Korean leader Kim Jong-un expressed his resolution for the denuclearization of the peninsula as well as for the upcoming South-North and the North Korea-U.S. summit meeting,” said Blue House Spokesman Kim Eui-kyeom in a statement.

He said this week’s meeting could provide momentum for the denuclearization of the peninsula. He hailed Beijing’s contribution to helping achieve regional stability and peace.

During his meeting with Xi, the North Korean leader said denuclearization could be achieved if Seoul and Washington “respond to our efforts with goodwill, create an atmosphere of peace and stability while taking progressive and synchronous measures,” without specifying what such measures are.

Asked about that remark, South Korea’s Foreign Ministry said Thursday “more analyses would be needed” to find out what those “progressive and synchronous” measures mentioned by Kim would be.

To brief Korea on the details of the Kim-Xi meeting, China’s state councilor Yang Jiechi arrived in Seoul Thursday and met with Chung Eui-yong, head of the Blue House National Security Office. Yang, who was sent as Xi’s special envoy, told reporters before heading into a meeting room at the Chosun Hotel in Seoul that Kim’s visit to Beijing would “help resolve” the issue of denuclearization and added that Xi and Kim spent a long time exchanging thoughts.

Following the meeting, the Blue House issued a statement saying Yang provided Chung a detailed account of the Kim-Xi meeting. The two agreed to continue close consultations on the upcoming two summit meetings.

Kim’s time with Xi indicated a revival of warmth between the two Communist allies, which had experienced a cooling off through Pyongyang’s years of nuclear and missile tests, which Beijing warned against. Rattled by those tests, Beijing endorsed and enforced rounds of international sanctions aimed at stripping the Kim regime of foreign exchange needed to continue its nuclear program.

It was speculated that the Chinese leader held a personal grudge against the North Korean leader, whom he hadn’t met since he took power after the death of his father Kim Jong-il in December 2011.

But if there were any hard feelings between the two, who are nearly 30 years apart in age, they didn’t show during the two-day Beijing meeting.

Also through the meeting with Kim, Xi appeared to have restored a grip on Korean affairs that was slipping away as Beijing was sidelined in recent diplomatic developments that resulted in two scheduled summit meetings among the leaders of the two Koreas and between Kim and U.S. President Donald Trump.

During Kim’s Beijing trip, personal warmth between the two were manifested in both words and images. Calling Kim “Comrade,” Xi said Kim and he “have personally experienced and witnessed the development” of Pyeongyang-Beijing relations, adding that such a strong relationship “should be passed on continuously and developed better,” according to the state-run Xinhua News Agency.

Xi continued that strong ties should not change “because of any single event at a particular time.”

Kim replied by saying he was “greatly encouraged and inspired” by Xi’s views on the bilateral relations and noted it was his “obligation” to come to Beijing and congratulate Xi in person for his recent re-election as the Chinese president.

In images, Xi was seen firmly shaking Kim’s hand with a smile. The leaders, accompanied by Kim’s wife Ri Sol-ju and Xi’s wife Peng Liyuan, had two meals together during Kim’s stay.

Xi and his wife held a welcome bouquet following the two leaders’ meeting on Monday at the Great Hall of the People, followed by an arts performance that lasted until 10 p.m. In one picture released by the North’s Korean Central News Agency, Xi offered a toast to Kim with a smile during the banquet.

In a video clip released by CCTV, China’s state-run broadcaster, Kim was shown dutifully taking notes of Xi’s remarks during the meeting, images that would likely never be published in Pyongyang.