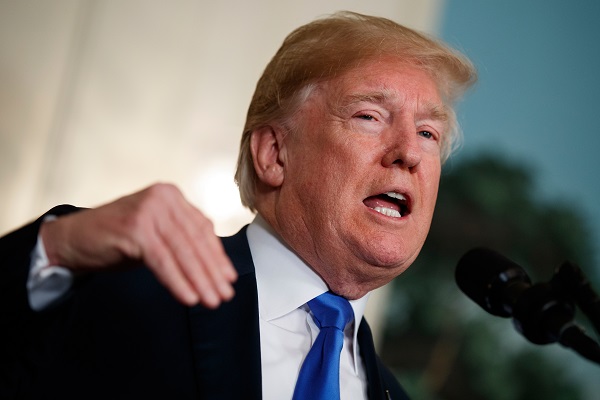 The U.S. President Donald Trump abruptly threatened to put the implementation of the recently-revised free trade agreement with South Korea on hold to use it as leverage to strike a deal with North Korea.

“We’ve redone it, and it’s going to level the playing field on steel and cars and trucks coming into this country,” Trump reportedly said in a speech in Richfield.

“I may hold it up until after a deal is made with North Korea,” Trump added. “You know why? Because it’s a very strong card and I want to make sure everyone is treated fairly.”

Trump’s remarks came just a day after a joint statement by United States Trade Representative Robert Lighthizer and South Korea’s Trade Minister Kim Hyun-chong announced that a deal had been clinched. The statement said the two countries “have reached an agreement in principle on the general terms of amendments and modifications” of the FTA.

In the preliminary agreement reached over months of negotiations, South Korea and the United States decided to raise the number of U.S. cars imported into South Korea that don’t have to comply with domestic safety regulations from an original 25,000 to 50,000. The two countries also decided to extend a U.S. tariff on South Korean pickup truck exports by an additional 20 years to 2041.

The statement by Trump came after U.S. Treasury Secretary Steven Mnuchin said in an interview with Fox News last Sunday that the new agreement would be signed soon, calling the deal a “win-win.”

The president himself called it a “great deal for American and [South] Korean workers” on his Twitter page after the details were announced by the U.S. trade representative.

“We are actually in the process of figuring out what exactly President Trump meant by what he said because it was very abrupt,” a high-ranking official from the South Korean Ministry of Trade, Industry and Energy who was directly involved in the renegotiation of the FTA told the Korea JoongAng Daily Friday. “It’s very confusing and nothing’s been officially confirmed yet.”

Controversy and complications over the recently-revised free trade agreement between the United States and South Korea refuse to fade.
The U.S. trade representative stated Thursday that “the U.S. Department of the Treasury is leading discussions on currency with Korea’s Ministry of Strategy and Finance” in a fact sheet that outlined the result of the recent negotiations.

“I think there may have been confusion because the discussion on [currency] took place at the same time as the FTA and steel tariffs,” said Paik Un-gyu, the Minister of Trade, Industry and Energy of South Korea when he met with local reporters in Sejong Thursday evening. “But it was clearly a separate topic.”

“There may have been some mention of the topic but we had no negotiators in regard to foreign exchange rates [when we discussed the FTA and steel tariffs],” explained Yoo Myung-hee, deputy minister for trade negotiations. “All we know is that the South Korean Finance Ministry and U.S. Department of Treasury have been, and still are, in negotiation.”