Drugs from U.S. likely to be more expensive after FTA deal

Drugs from U.S. likely to be more expensive after FTA deal 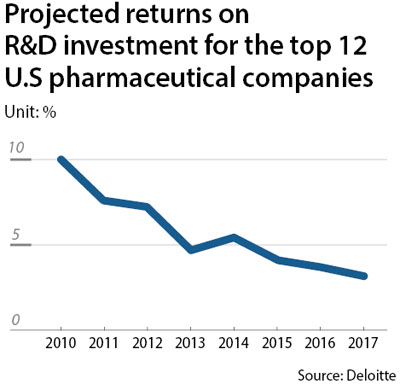 When Washington and Seoul renegotiated their bilateral free trade agreement (FTA) to give American cars greater access and exempt Korea from steel tariffs, they also reached a deal that could potentially send the price of U.S. drugs in Korea soaring.

On Wednesday, the U.S. Trade Representative summarized the outcome of the month-long trade talks on its website. A section titled “Pharmaceutical Reimbursements” read, “Korea will amend its premium pricing policy for global innovative drugs to make it consistent with Korea’s commitments under [the U.S.-Korea Free Trade Agreement] to ensure non-discriminatory and fair treatment for U.S. pharmaceutical exports.”

Earlier on Monday, Trade Minister Kim Hyun-chong, who led the negotiations in Washington, affirmed the government would “review whether there are any discriminatory aspects” in Korea’s pricing policy during a press briefing. “I think it’s necessary to correct wrongs if we find a possibility of discriminatory practices,” he added.

Washington probably isn’t counting on pharmaceuticals to resolve its trade deficit with Seoul, which hit $10.7 billion in 2017, but it’s taking the opportunity of revising the trade deal to change Korean drug pricing policies, a move that the U.S. pharmaceutical sector has been pushing for years.

Korea’s National Health Insurance Service, or NHIS, which operates the country’s near-universal healthcare, gets the final say in pricing all new drugs. When pricing foreign drugs, the NHIS measures the weighted average of other drugs in their therapeutic class in seven reference countries and applies the lowest possible price domestically.

This process often results in new global drugs in Korea costing only 44 percent of the Organization for Economic Cooperation and Development average. Drug prices are also slashed by 10 percent if they exceed expected sales. The price drops further when generic drugs, or replicas of brand-name medicine, are released.

Unsurprisingly, the Korean pharmaceutical market has earned a bad reputation among global players. Foreign drug manufacturers have started releasing new drugs in Korea later than in China, fearing the low prices here will convince other countries to adopt similar prices.

Although the same drug pricing policies apply to local pharmaceutical companies, domestic drug developers can qualify for a 10 percent price increase on new products as part of a scheme to encourage more local firms to come up with new drugs. There is no such benefit for foreign drug manufacturers.

The Pharmaceutical Research and Manufacturers of America (Phrma) has long been critical of the Korean pricing system and the incentives that favor local firms. According to Phrma, the system creates an imbalance as Korean companies are importing U.S. drugs for cheaper than American citizens can get them in the United States.

Developing new drugs is expensive and time-consuming. Getting a new medicine licensed involves toxicology testing, animal testing and at least three phases of clinical tests - a major project that can take nearly 10 years. Increasingly regulated clinical trials have also bumped up the average cost of new drug production to $2 billion in 2017 from $1.2 billion in 2010, according to consulting firm Deloitte.

Rising costs of R&D, coupled with the fact that drugs for most known diseases are already out in the market, are discouraging U.S. bio firms from investing in the development of new drugs. While the R&D to sales ratio for the top 12 U.S. bio firms measured 10.1 percent in 2010, it dropped as low as 3.2 percent last year.

Given these trends, American pharmaceutical authorities are eager to push Seoul into lowering the barriers to the domestic bio market. Government organizations like the U.S. Food and Drug Administration are now actively supporting pharmaceutical companies at every step of the drug development process.

Korea’s pharmaceutical industry is concerned that revisions to the U.S.-Korea FTA will mean caving into the U.S. bio industry’s demands. Domestic businesses - which are much younger and less experienced than their American counterparts - have little confidence that they can compete with global pharmaceutical giants on the same playing field. Even if Korean drug makers manage to get Washington to allow them to expand to American markets, there are likely to be very few immediate gains.

“The Korean bio industry is much less competitive in developing new drugs than its American and European counterparts,” lamented one expert in the Korean pharmaceutical industry. “The situation will deteriorate if incentives given to domestic firms are taken away.”